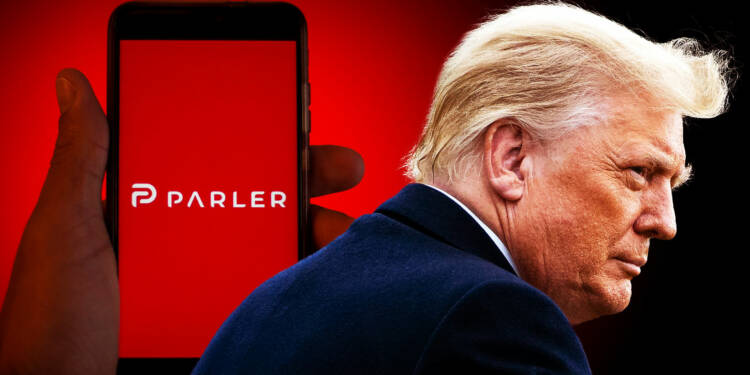 The bid to block Donald Trump from holding office failed as the impeachment trial against the Former President failed horrendously. Now, Trump is back, Parler is back and they are going to get bigger and stronger before 2024.

After Parler was booted off Amazon’s web server, the majoritarian left partisan ‘Big tech’ believed that it had crippled the right wing’s reach for good. Even the account of the sitting President was blocked permanently. But it was not to be.

Parler found a server and now it has found a new CEO to lead them into battle against the Big Tech and more importantly against the left-libertarian thought that dominates the narrative building in America.

After a month-long gap, Parler has come back online, and the free-speech platform says “it is here to stay.” Parler said the plan was to bring the service back online for existing users first, with new users able to sign up in a week’s time. And it was no longer working with a “big-tech” provider but was “built on sustainable, independent technology”.

John Matze was booted off Parler. While his devotion towards Parler was commendable, his indecisiveness was also delaying Parler’s comeback. In an interview with “Axios on HBO,” he said that he didn’t want the social-media platform to work with Donald Trump.

Mr Meckler said, “We will thrive as the premier social media platform dedicated to free speech, privacy, and civil dialogue, And the decision of other technology companies to cut ties with Parler had been taken “by those who desire to silence tens of millions of Americans.”

Mr Meckler is an ardent supporter of Trump and his policies. He has appreciated Trump’s policies on immigration and others in a number of articles he has written for MUCK RACK. He was also one of the first critics of Biden to slam him for his predictable use of executive orders to run the country even before Biden was sworn into office. Biden signed 42 executive orders in his first week in charge.

After Trump was accused of inciting riots, his accounts and handles were permanently blocked by the ‘Big Tech’ conglomerate. Now that he has been acquitted, it is safe to assume that he would not be welcomed back on these platforms. Therefore, Parler’s resurgence after Trump’s acquittal is a major sign of the things to come.

Trump’s popularity has not deteriorated. He visited Florida, after stepping down as President and a huge rally ensued to welcome him. Moreover, since he has been acquitted, his approval ratings are on an upward trend.

According to a poll of 1,984 registered voters found that 54% of Republican respondents said they would vote for Trump in a hypothetical GOP primary in a survey taken February 14 to February 15, just after the end of his second impeachment trial, a return to the share reported to support the president just before the Capitol riot.

59% of Republican respondents Morning Consult/Politico poll said Trump should “play a major role” in the future of the Republican Party, up 18 points.

And Parler will play a big part in Trump’s bid in 2024. It had been alleged by the mainstream media that Trump’s biggest donors and Parler’s owners had pulled their support as donors for Trump’s election campaign, but interestingly all of that money was being re-routed to be invested in Parler, to build its capacity and technology. Now we know why.

Parler, being the righteous proponent of free speech was always at risk of getting bullied by Big Tech. Thus, to counter that Parler had been investing in technology to become self-sufficient and sustainable and now it is ready with Trump to break into the wildly inaccurate narrative set by Big Tech and the leftists.