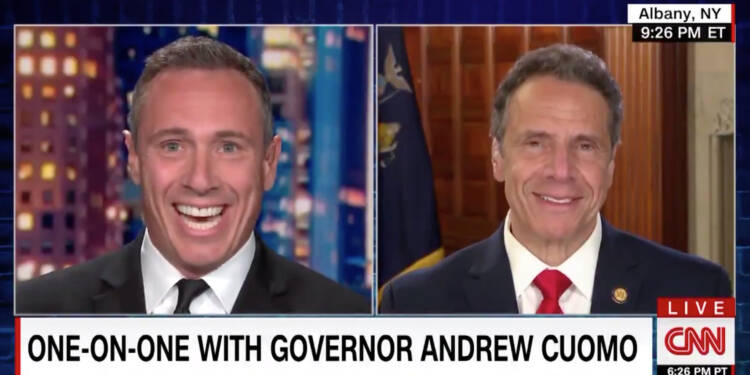 The bromance staged by CNN anchor Chris Cuomo and his brother and New York Governor Andrew Cuomo has come to an end. The latest revelations by New York Post, surrounding Gov. Andrew Cuomo hiding the deaths of people in New York has rocked the pro-Democrat media establishment and forced the hands of CNN to reinstate the 2013 ban which prevents Chris Cuomo from interviewing and covering his brother.

For the whole of 2020 and during the pandemic, CNN had become an organ for promoting and advertising New York Governor Andrew Cuomo. Chris Cuomo, CNN anchor and brother of New York governor Andrew Cuomo was given a free hand to interview his brother and with a combination of the brotherly love and relentless praise of how bravely the Governor dealt with the COVID-19 pandemic, CNN was making the case for the New York governor for the post of President if and when possible.

For what it was worth, Andrew Cuomo was able to get his book American Crisis: Leadership Lessons from the COVID‑19 published and it became a New York Times Bestseller. The propaganda was much successful, not only for the Cuomo brothers but also for the Democrats, who for the longest time wanted to portray themselves as the progenitors of Science and that they had the grasp of how to deal with the Covid-19 situation.

Even with the COVID-19 death data being under-reported deliberately by Gov. Cuomo, to some estimates by 50%, New York State was the worst affected of all the places in the United States of America with 1.57 million cases and nearly 46,000 deaths reported so far. However, as they say, a good PR campaign can make you believe the presence of a glacier in a desert. This is what Chris Cuomo’s consistent PR promotion of Andrew Cuomo did for the New York governor and the bromance was also profitable for the Democrats and CNN alike.

At a time when the pandemic was peaking in New York and the focus of the media should have been on critically analysing the pandemic management, they kept on piling praises and glorified Cuomo’s COVID-19 response. But, now with the latest revelations, the Democrats and their loyal media houses are throwing Cuomo under the bus. In his defence, Cuomo said any disconnect between his office and state lawmakers was the result of a “breakdown in communication between the staff and members of the legislature.” But several Democratic lawmakers, including New York State Sen. Jessica Ramos, denied that Cuomo’s office ever informed them of its decision. “Trash. No one believes you,” Ramos wrote on Twitter.

Read more: Cuomo was getting too big for Biden. Now his wings are being clipped so that he doesn’t become a challenger in the future.

As the Democrats have ditched him, so have the guys at CNN. In a prepared statement, a CNN spokesperson said, “The early months of the pandemic crisis were an extraordinary time. We felt that Chris speaking with his brother about the challenges of what millions of American families were struggling with was of significant human interest.”

“As a result, we made an exception to a rule that we have had in place since 2013 which prevents Chris from interviewing and covering his brother, and that rule remains in place today. CNN has covered the news surrounding Governor Cuomo extensively,” the statement added.

By reinstating the ban, the media organisation has accepted that Chris Cuomo was promoting his brother all this time. Chris Cuomo has basically used his platform for his brother’s election campaign. In an interview of Andrew Cuomo, Chris said, “Obviously I love you as a brother, obviously I’ll never be objective, obviously I think you’re the best politician in the country,” adding, “But I hope you feel good about what you did for your people because I know they appreciate it… I’ve never seen anything like what you did and that’s why I’m so happy to have had you on the show. And I hope you know that.”

Not objective but true,the facts tell the story.NY had & has its struggles but they're doing way better than what we see elsewhere & no way that happens without the Luv Guv dishing the real 24/7.He works with relentless intensity & NY's better for it.And as a brother, I am proud. pic.twitter.com/M1TrAtQwCo

In addition to this when the Republican lawmaker Ted Cruz cornered Andrew Cuomo, Chris Cuomo came to his support, which was totally unwarranted, because he was to interview the Republican senator and not defend the New York Governor. When Ted Cruz said, “Was it a mistake when your brother implemented a policy that nursing homes had to accept COVID-positive patients and endanger the lives of tens of thousands of seniors in New York state?”. Chris said, “My brother was the first one to say that there was a learning curve and that mistakes were made and that they changed things as soon as they could.”

The whole time, New York’s COVID curve was worse than the rest of USA, and if we now add the data that was hidden then the conclusion can be that Andrew Cuomo failed phenomenally and given the coverup, his acts were criminal in nature. And with the things out in public view, the Democrats are trying to use the New York governor as a scapegoat. And now the reinstatement of the ban on Chris Cuomo to not interview his brother Andrew Cuomo is an open recognition that CNN was used as a platform by their star journalist Chris Cuomo to promote his brother.

Los Angeles County DA resigns from California’s DA association to combat racism, turns out he was not even a member of it