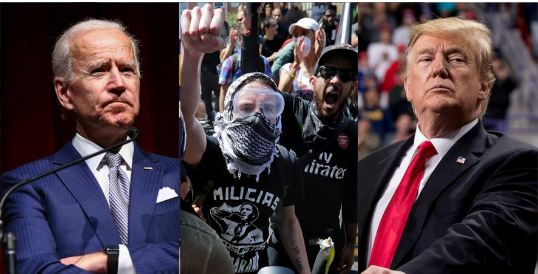 For quite some time now, the Republicans have only observed the actions of the Biden administration and they do not seem happy. Biden has been relentless in building the narrative that all the Republicans who supported the Trump administration and continue to do so are equivalent to ‘white supremacists’ and thus deserve no sympathy of fellow Americans is reprehensible. This is the exact sentiment that has been echoed by the Republicans. While the Left and Biden administration has shown no remorse in terming the Proud Boys and other Trump supporters as ‘white supremacists’, they have taken an entirely opposite direction vis-a-vis the Antifa.

The Democrats have portrayed the Antifa activists as a group of knights in the white armour who are doing their level best to resist fascism, and any act of violence on their part can be conducted with impunity. In line with this, Montana lawmakers are considering a bill that would designate Antifa as a domestic terrorism group. The purpose of the measure is to “send a message that we, as a state, will not tolerate a group like this coming into our state,” said Rep. Braxton Mitchell, R-Columbia Falls, a bill sponsor to the Montana House Judiciary Committee.

In a situation where Antifa activists is being portrayed as a group of knights in white armour, a perfect irony can be encapsulated. It is supported by the fact that the Biden administration has removed the tag of terrorists from Houthis, but still considers the Trump supporters as white nationalists and terrorists. The fact that the Biden administration did not deem it necessary to call out the Canadian government when it declared the Proud Boys as terrorists, proves the same.

According to a Reuters report, State Department spokesman Ned Price called on the Houthis to halt the Marib attack, cease all military operations, end cross-border strikes on Saudi Arabia and participate in a U.N.-led peace process. Marib is one of the few cities left that is operated by the internationally recognised Yemen government having the backing of the Saudi coalition. Antifa, on the other hand, is being whitewashed by the Biden administration.

Read more: Biden recently took the terrorist tag away from Houthis. Now he is begging them to stop the violence as Iran watches with glee.

This is not only a very stark, but a very sorry situation. The Biden administration is going easy on the foreign terrorist organisations, but it is not even thinking twice before taking actions against its political opposition and taking the democracy to peril by equating its opposition with the terrorists, even subtly. Montana’s designation could allow law enforcement to “look into” those suspected of Antifa activities. However, the lawmaker said that he did not consult with state law enforcement officials when drafting the bill.

The new law, as is being planned, can set a precedent and go a long way in ascertaining the reality of the Antifa and the ideology backing it. It can even take the Democrats to the cleaners, given that they didn’t even think twice before coming in support of Antifa activists during the ‘Black Lives Matter’ Protest.

The bill will make sure that a spade is called a spade, no matter how much the Democrats want to keep the Antifa as their tool to intimidate people and purport anarchy. With the tools available to arrest those who are participating in spreading anarchy, things will change and other states too could copy the idea and take things forward.

As Texans freeze without power and deal with contaminated water, Democrats blame fossil fuel for the mess