Biden recently took the terrorist tag away from Houthis. Now he is begging them to stop violence as Iran watches with glee 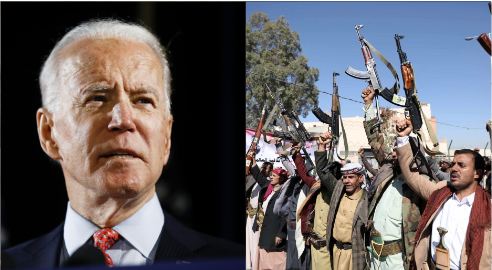 After pulling out abruptly from the Yemen war leaving ally Saudi Arabia in the lurch and removing sanctions on Iran-backed Houthi rebels, the Biden administration is now pleading in front of the Houthis to stop the violence and withdraw from the war. Yes, you read that right, the USA is sitting on its knees and gently pleading to a terrorist organization to backtrack.

According to a Reuters report, State Department spokesman Ned Price called on the Houthis to halt the Marib attack, cease all military operations, end cross-border strikes on Saudi Arabia and participate in a U.N.-led peace process. Marib is one of the few cities left that is operated by the internationally recognized Yemen government having the backing of the Saudi coalition.

“The Houthis’ assault on Marib is the action of a group not committed to peace or to ending the war afflicting the people of Yemen,” Price said in a statement.

Timothy Lenderking, the recently appointed U.S. special envoy for Yemen has been using back channels to talk to Houthi’s since his promotion earlier this month but to no avail. The Biden administration appears confused in its stance regarding Yemen and how it wants to bring the country to peace and stability.

Reported by TFI earlier this month, it was Presidednt Joe Biden who announced that the US will be pulling troops from Yemen.

“This war has to end. And to underscore our commitment, we’re ending all American support for offensive operations in the war in Yemen, including relevant arm sales,” the US president said in a speech at the State Department.

Furthermore, the Biden administration also decided to stop the arms export to the KSA, UAE, and other Arab allies of America. These weapons were being used to fight the Houthis and a sudden drop in the arms supply would give rebels the upper hand, which in turn will bolster Iran.

Read more: Within a month of coming to power, Biden reopens flashpoints across the world and USA is back to confrontational politics

By lifting sanctions on the Houthi rebels which were imposed during the Trump administration the Biden administration has given an added cushion to Iran to pursue its geopolitical goals in the war-ravaged nation. Since Biden came to the White House, it is Tehran that has been having the most wonderful time, smiling, from ear to ear.

The rogue nation is openly advancing towards developing a nuclear ‘armageddon’ bomb by upping the uranium enrichment process. Simultaneously, Tehran is giving threats to the US that if it does not sit across the table and reinstate the 2015 Iran Nuclear deal and remove the sanctions, it will continue to hurt the stability of the region.

Whether it’s the right or wrong decision to pull out of a war which, to begin with, was the making of a previous Democrat President, is for the subject experts to argue. But the rationale says that the US, under Biden, is working to strengthen Iran who will find its way around in the impoverished Arab country, and gain access to the strategically important maritime chokeholds like the Bab al-Mandab strait.

The US which the world knew would have never pleaded in front of a terrorist organization but such is the state of affairs under President Joe Biden that the unthinkable has happened.

‘Xi is bringing a uniting tightening control in China,’ Biden justifies the Uyghur genocide by downplaying it