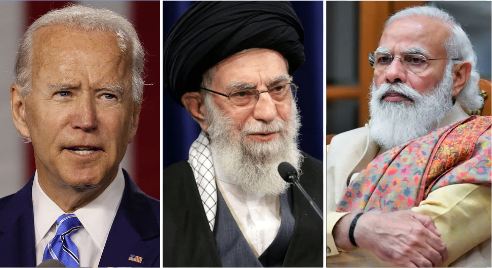 Biden’s rise to power in the United States has opened up geopolitical tussles surrounding Iran in the Middle East. And now India also seems to be giving a subtle message to its frontline allies- the US, Israel and the Arabs.

So, the Indian Navy contradicted a top Iranian Navy official. And this is, of course, not without any reason. By denying participation in the Iran-Russia Maritime exercise, India has sent a message of solidarity to its key allies in the Middle East- Israel and the Arabs.

The broad message is that India doesn’t want to have anything to do with Iran at a purely military level. Iran remains important for India at a strategic level, and the Chabahar port is probably New Delhi’s most strategic overseas investment. Yet, New Delhi understands how the Shi’ite nation is at odds with Israel, Saudi Arabia and the UAE. This is exactly why India refuses to cooperate with Tehran at a military level.

The entire Middle East is important for India. But New Delhi is conveying that the Arabs and Israel are more important than Iran.

As for Israel, India has conveyed that Israel remains a natural ally for New Delhi. And as such the Indian leadership also understands Israel’s security concerns. There should be a high level of trust between India and Israel, and by denying participation in a military exercise with Iran, New Delhi is reinvigorating that mutual trust.

As for the UAE and Saudi Arabia, India is making it clear that it has chosen to deepen its alliance with them. At least for now, India has chosen the Arabs over Iran. This suggests that the relationship between New Delhi and Riyadh or Abu Dhabi doesn’t have to be merely transactional from here on. With the convergence of security interests, both sides can move towards nurturing a strategic relationship.

Finally, there is a word of caution for the US President Joe Biden. Ever since he came to power, Biden has been trying to revive the Joint Comprehensive Plan of Action, also called the Iran nuclear deal. Biden continues to handle Iran with kid gloves, even though the Arabs and Israel have been expressing concern about the consequences of Biden’s pro-Iran policies.

New Delhi is however making it clear to Biden that India too supports Trumpism with reference to Iran. There are certain dimensions of Tehran like its belligerence, which have to be corrected. Trump was doing just that and Biden should follow in his predecessor’s footsteps.

New Delhi has adequate bandwidth for American pressure on Iran. India doesn’t have any problem with US sanctions and restrictions on Tehran, as long as there is no bad blood between Israel and Iran. Therefore, Biden has no real reason to go soft on Tehran at this juncture.

As for Iran, India does carry a small message. New Delhi is making it clear that military ties cannot be worked out unless and until Iran stops flip-flopping between India and China, ends its policy of belligerence towards the outer world and stops blackmailing New Delhi to secure its support.

Hence, a single move by India has conveyed some strong messages to many of New Delhi’s key allies and prominent actors in the Middle East.