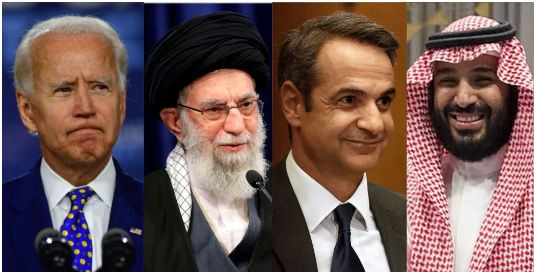 The dynamics in the Middle East have taken a sudden turn. This comes after the Biden Administration took a sharp turn with respect to the USA’s policy priorities for the region. The Biden administration is overtly indulging in the appeasement of the Iranians and it doesn’t seem to be mind abandoning its own allies in the process. However, with these geopolitical earthquakes, ripples are being felt by the neighbouring countries too. Now as per reports, Greece will sign an agreement with Saudi Arabia for the transfer, installation and operation of a Greek Patriot anti-aircraft system, according to Foreign Minister Nikos Dendias. However, he specified that it is a defensive technology and thus, the agreement will be signed for defence purpose only.

Greece, which faces the brunt of the illegal immigrants when Turkey opens the floodgates, is trying to take its ties with Saudi Arabia and its allies in the Middle East to the next level. Erdogan led Turkey tried to intimidate the Greeks in the Eastern Mediterranean Sea last year and have shown how big of a geopolitical threat they can be.

In addition to this, any de-stability in the Middle East will have direct repercussions along the Greek borders. Making all the political considerations, it seems that Greece has decided to deepen its growing relations with Saudi Arabia and its Gulf allies.

The Biden administration has bent over backwards to get Iran to the table and sign the Nuclear Deal. It has started removing sanctions that were placed on Iran. The desperation is visible given the recent announcement to initiate diplomatic talks has also been accompanied by a formal repudiation of Trump’s “maximum pressure” policy against Iran. While exiting the JCPOA, the Trump administration had announced that all sanctions against Tehran will stand reimposed.

But now the Biden administration has reversed Trump’s 2018 determination and the consequence is that the US is going to ease stringent restrictions on the domestic travel of Iranian officials posted to the UN. In such a situation, none of the US allies can trust it for having its back. This is why Greece is willing to make a bet by allying with the Saudis and its other Gulf allies.

The USA has put the weapon sale to Saudi Arabia in an unending limbo and the same is the case for the sale of F-35s to the UAE, by sending both of them for a review. In such a situation, when the USA is not keeping true to its early promises to its long-standing allies, it is hard for Greece to believe that it will be rescued by the Biden administration if and when Erdogan restarts with its intimidates tactics.

Greece is cognizant of the long-standing rivalry between the Riyad and Ankara. It was because of this, that the Greeks had improved their relations with the UAE and the Saudi Arabians. Now by providing Riyad with the Patriot anti-aircraft system, Athens has showcased its commitment to the sustenance of this friendship. This happening at a time when the USA has left the Saudis and Israelis, for their arch-rival Iran is a highlight.