Biden administration may do away with ICE once and for all 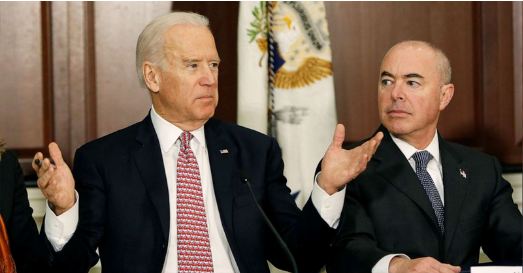 It is now well-known that Biden rose to power with the backing of the radical left. And now he is returning the favour. The US President is showing that he really is the puppet of the radical left. Biden seems to have conceded what the likes of Bernie Sanders, Pramila Jayapal, Alexandria Ocasio-Cortez, Elizabeth Warren and Mark Pocan always wanted- dismantling the US Immigration and Customs Enforcement (ICE).

A recent Washington Times report explains how Biden may not even have to abolish ICE because he will make it obsolete for all practical purposes.

Presently, the ICE is supposed to check illegal immigration and functions as the federal deportation agency. But Homeland Security Secretary Alejandro Mayorkas has a plan that would strip ICE of its basic function and practically convert it into a criminal investigation agency.

Washington Times reported that as per sources, Mayorkas revealed his plan to agency personnel last week in a telephone meeting. Sources further told Washington Times that the Homeland Security Secretary had a proposal- taking the 4,000 ICE staffers off the streets and converting them into criminal investigators.

The ultimate object behind the radical left’s “Abolish ICE” movement was to allow unhindered immigration into US borders. And Mayorkas’ plan can do just that by stripping 4,000 staffers of their powers to enforce the immigration law. And therefore, the Homeland Security Secretary’s plan should satisfy the extreme-left section amongst the Democrats.

If put into effect, Mayorkas’ plan would lead to a drastic fall in the arrests and deportations of illegal immigrants. As per Washington Times, deportation officers feel that the plan is akin to a city police department converting its beat cops into detectives and leaving the streets unpatrolled.

Washington Times quoted a source as saying, “This is an administrative abolishment of ICE as we currently know it.”

And in order to push through the plan, Mayorkas is handing out what he sees as a promotion to officers. They are being offered the rank of agent- a consideration to get them to agree on a sharp curtailment of deportation functions.

Yet, Washington Times quoted a source as saying that the officers who were a part of the conversation expressed concern. They feel as if they are being pushed out of the job that they signed for.

The Biden administration is really pushing the envelope on the issue of immigration. Even Biden’s Attorney General nominee Merrick Garland seemed to give away a hint when Senator Dick Durbin asked, “Just a fundamental question. Do you believe that illegal entry at America’s borders should remain a crime?”

The Attorney General nominee added, “I think, you know, the president had made clear that we are a country with borders and with a concern about national security. I don’t know of a proposal to decriminalize but still make it unlawful to enter. I just don’t know the answer to that question – I haven’t thought about it.”

Biden seems all set to concede completely on the issue of immigration. He simply cannot handle the pressure that the radical left is exerting on him. And at the end of the day, President Biden seems to be consistently moving towards the plan of creating a pathway to citizenship for 11 million illegal immigrants. The process may as well start with the abolition of ICE as we know it.