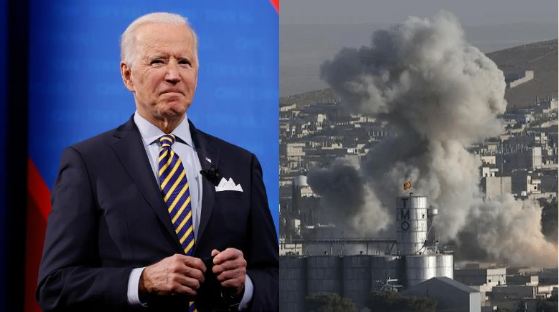 Exactly 36 days after becoming the US President, Joe Biden ordered strikes in Syria, a move that amazed many. No one doubts the war lust of the Democrats but the fact that the strike targeted facilities near the Iraqi border used by Iranian-backed militia groups made people world over ponder over it. Pentagon Press Secretary John Kirby said, “These strikes were authorized in response to recent attacks against American and coalition personnel in Iraq, and to ongoing threats to those personnel.”

That’s obviously a lot of hogwash right there. The actual reason behind the strikes can be understood only after taking the history into consideration, so let’s first revisit the history.

On 15th of July 2015, Obama urged Congress to support the Joint Comprehensive Plan of Action or JCPOA. In his words, “If we don’t choose wisely, I believe future generations will judge us harshly, for letting this moment slip away.” Obama further stated:

“I have a lot of differences with Ronald Reagan, but where I completely admire him was his recognition that we were able to verify an agreement that was negotiated with the evil empire which means the Soviet Union that was hellbent on our destruction and was a far greater existential threat to us than Iran will ever be. I had a lot of disagreements with Richard Nixon, but he understood there was the prospect, the possibility, that China could take a different path. You test these things, and as long as we are preserving our security capacity—as long as we are not giving away our ability to respond forcefully, militarily, where necessary to protect our friends and our allies—that is a risk we have to take.”

Beneath the veneers of the ear pleasing rhetoric from the mouth of the master orator Barak Obama, was the plan that paved the path for the JCPOA, which we simply refer to as the Iran nuclear deal. Needless to say, that it made both Israel and Saudi Arabia jittery. Iran is an existential threat to Israel and a theocratic foe of Saudi Arabia.

Then came Donald Trump. Donald Trump while campaigning as the Republican Presidential nominee had condemned the JCPOA as “the worst deal ever negotiated” and a disaster that could lead to a nuclear holocaust. As the President, Trump bolstered USA’s ties with Saudi Arabia, Israel, the UAE and other Gulf states. Iran naturally became a pariah in the region. And the JCPOA was quietly dumped in the trash bin.

Then came Joe Biden and like an obedient subordinate of Barak Obama, he almost immediately brought up the issue of the Iran nuclear deal, a move that greatly enraged both Israel and Saudi Arabia.

Since becoming the President, Biden has openly flirted with Iran. He began his term by punishing all of Iran’s foes. It started with the UAE as Biden suspended arms sales to the it. He did the same with Saudi. He didn’t call the Israeli Prime Minister Benjamin Netanyahu for almost a month, giving noticeably clear signals that he didn’t like Netanyahu rallying for Trump’s cause. Now he is trying to pull Saudi Arabia’s Crown Prince down by trying to frame him in Jamal Khasoggi murder case. These moves served two purposes, firstly, they greatly undermined Trump’s legacy who is currently the bête noire of the Democrats and the deep state and secondly, it served as a message of camaraderie with Iran whose ego was greatly bruised during the Trump era.

Now that we are done with brushing up the history, let’s revisit what happened in Syria. As explained earlier, Joe Biden ordered strikes in Syria exactly 36 days after becoming the US President. The strike targeted facilities near the Iraqi border used by Iranian-backed militia groups. So why would Biden anger Iran by targeting militia groups backed by it after 36 days of mollycoddling it? The answer is quite simple and it’s astonishing to note that the entire global media has failed to decipher the reason behind the strikes. Right Wing Media called it the war lust of the Democrats who must oblige the arms manufacturers by launching wars in different parts of the world. The left-wing media opined that this was the stick part of Biden’s carrot and stick approach towards Iran. But the reality is actually quite simple.

The strike is a diversionary tactic, a giant smokescreen to ensure the seamless passage of the Iran Nuclear deal. Biden needed a high moral ground and the strike in Syria provides him with just that. The strike is intended to prove to the world that while the Biden administration is not averse to sealing the deal with Iran, it will not sit back and watch if Iranians resort to attacking them. Iran will constantly be under a check by the United States thereby becoming a responsible nuclear nation. Yes, that’s exactly what the strikes intend to imply.