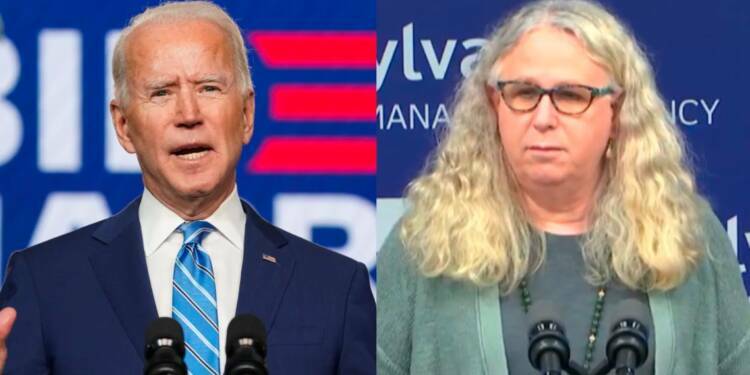 Joe Biden’s pick for Assistant Secretary for Health and Human Services, Rachel Levine, a biological male turned a transgender woman, in the past has advocated for hormone therapy and sex-change surgery for minors. The people in the USA have been largely oblivious regarding these views of Rachel Levine. However, Sen. Rand Paul (R-Ky.) questioned Dr Rachel Levine on her past support and constant advocacy for genital mutilation and hormone blockers.

Sen. Rand Paul (R-Ky.) questioned Dr Rachel Levine on the past support, noting that data from the American College of Pediatricians shows that 80 per cent to 95 per cent of children, who believe they’re a gender different, will see a dissolution of those feelings by late adolescence if they’re not exposed to medical intervention and social affirmation. And as he kept pressing, Rachel Levine never denied the claims, which makes it clear that Biden’s pick still strongly believes in these practices and advocates the same.

Sen. Rand Paul provided the best-suited analogy for gender change surgery. He said, “According to the WHO, genital mutilation has been recognized internationally as a violation of human rights. Genital mutilation is considered particularly egregious because as the WHO knows, it is almost always carried out on minors and is a violation of the rights of children.”

He provided the analogy and made the case that both are similar situations and added, “Most genital mutilation is not typically performed by force, but as WHO notes that by social convention, social norm. The social pressure to conform, to do what others do and have been doing as well as the need to be accepted socially and the fear of being rejected by the community. American culture is now normalizing the idea that minors can be given hormones to prevent the biological development of their secondary sexual characteristics.”

These statements had substance and were well deserved as according to Biden’s pick, children ought to be given the freedom to choose their own gender. She has advised adults to “try not to force them one way or other” and instead to follow the child’s lead. For more context, speaking at Franklin and Marshall College in 2017, Levine said, “For prepubertal children, they might present in different ways. They might present at school in the gender they were identified at birth, or they might present as the other gender, or they might be more gender-fluid.”

Biden’s pick for Assistant Secretary for Health and Human Services even went to the extreme of insanity and stated that children as young as five or six, ‘know’ which gender they want to be identified as. Any right-minded person with a working mind will tell you that children do not have the best sense of judgement.

The children are continuously needed to be monitored, they do not know what will hurt them and what is dangerous, but according to Levine, they are perfectly capable to choose their own gender. Every year hundreds of thousands of children are abused, some even older than five, and the cases go unreported because the children are not even aware of good or bad touch.

Universal Adult Franchise has been accorded to people who are 18 years and older, given the society believes that they can make the best judgement for themselves. The irony in the reasoning of Biden’s transgender nominee for Assistant HHS Secretary is humongous. And Sen. Rand Paul used the reference of Keira Bell, who got an operation as a teenager but later regretted it. “I made a brash decision as a teenager, as a lot of teenagers do, trying to find confidence and happiness, except now the rest of my life will be negatively affected,” Bell told a court in the UK last year.

“There are no long-term studies. We don’t know what happens to them. We do know that there are dozens and dozens of people who have been through this who regret that this happened. And a permanent change happened to them. And if you’ve ever been around children, 14-year-olds can’t make this decision. In the gender dysphoria clinic in England, 10 per cent of the kids are between the ages of 3 and 10. We should be outraged that someone is talking to a 3-year-old about changing their sex,” Paul told Biden’s pick.

Sen. Rand Paul called a spade a spade and was the voice of reason during the conversation. He not only proved dangerous of the prepositions and believes of Rachel Levine, but also laid bare her dangerous and sickening beliefs. And the inability of Dr Levine to either counter these arguments or deny these claims prove that firstly, she is an advocate of genital mutilation and hormone blockers and her belief in these actions are beyond reason.