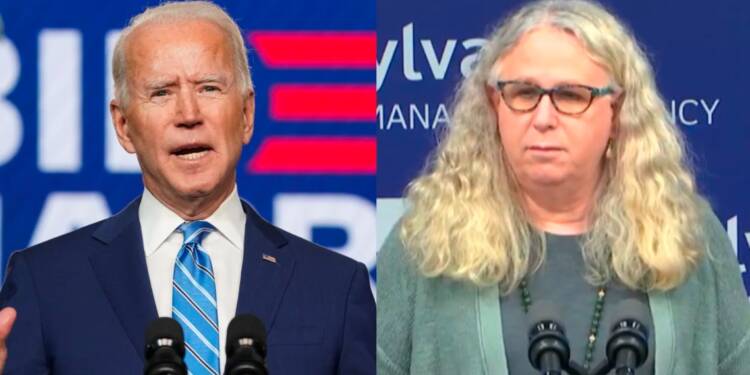 At the time of the pandemic, President Biden’s pick for an influential role in the Senate Health, Education, Labour and Pensions (HELP) Committee is raising more concerns than subduing and calming the nerves. Dr Rachel Levine is Biden’s pick for Assistant Secretary of Health at the Department of Health and Human Services. If nominated, she can and will change the way gender is looked upon in the United States starting with the children.

Biden’s pick Levine has been a vocal proponent of imposing a radical gender ideology on the kids of the United States. She has advocated for ‘sex-change’ for pre-pubertal people i.e., children.

According to Levine, children ought to be given the latitude to choose their own gender. She has advised adults to “try not to force them one way or other” and instead to follow the child’s lead.

She then gave an utterly ridiculous idea that children as young as five or six, ‘know’ which gender they want to be identified as. Yes, these are the same children, who need to be told about the rights and wrong, need to be reminded that eating food is necessary and everything else, already know the gender they want to identify it, according to Levine. Every year hundreds of thousands of children are abused, some even older than five, and the cases go unreported because the children are not even aware of good or bad touch.

At five or six, a child may not be even aware of his own anatomy and Dr Levine claims that they already know the genders they want to be identified as? Are those children even aware of what gender is? Will they even comprehend the idea and the consequences whatever it may be even if they are made aware and given their choice.

Also Read: What is Actin and Myosin, How Exercise Can Help boost?

That’s not where Levine’s radical gender ideas stop. She recommends that once a child reaches ‘young adolescence’, they must be given puberty blockers. In her speeches, Levine describes prescribing puberty blockers and cross-gender hormone injections to children who expressed anxiety about the natural process of puberty.

Her controversial judgements and statements go beyond children. Levine and Pennsylvania Governor Tom Wolf attracted headlines during Levine’s tenure as Secretary of the Pennsylvania Department of Health, by engaging in a punitive campaign of threats against counties that challenged state COVID-19 guidelines and sought to reopen their local economies as local businesses plunged further into despair.

In addition, Levine infamously pushed COVID-19 patients out of hospitals and into long-term care facilities and nursing homes, exacerbating the spread of the virus to the elderly and infirm, among whom it proved to be most lethal. This criticism was repeatedly downplayed by Levine, claiming that it was an essential part of the coronavirus response of the state and that COVID-19 was already present in those facilities.

In his first week in the White House, Biden signed an executive order removing the concept of gender in sports. Meaning, a boy who identifies as a girl can now play for the girl’s team. Never mind the sexual orientation of a person, but a boy who has been raised as a boy will still have the physical attributes of a boy.

The left-leaning ideas of gender norms have been on display since Biden’s ascension and now nominating a radical genderist to an influential position in the HHS would deeply intoxicate and break the social norms, starting with the kids. Thus far, opposition to Levine’s nomination has been muted at best. Not because they do align with her ideas, but they are scared of the man in charge in the White House, an enemy against the societal norms to push his political agenda.

Also Read: What is a Promised Land and Why you should read this?

Biden administration may do away with ICE once and for all