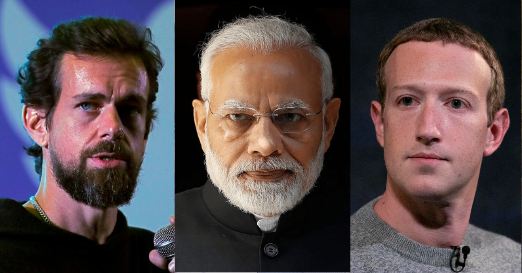 The entire free world is concerned about the role of social media giants, especially after former US President Donald Trump was arbitrarily silenced by the big social media companies. But where there is a will, there is a way. India has come up with some very tough draft rules for social media, as well as over-the-top (OTT) platforms. As such, India has drafted a new model that the rest of the entire world must follow.

On Monday, India’s Ministry of Electronics and Information Technology (MeITY) announced its draft Information Technology (Intermediary Guidelines and Digital Media Ethics Code) Rules, 2021. The draft rules apply to three online segments- social media, OTT and digital news media portals. For the first time, there is a conscious effort to catch up with online content and announce norms that would govern the conduct of such platforms.

MeITY Minister Ravi Shankar Prasad said, “We have not framed any new law. We have framed these rules under the existing IT Act.” Prasad added, “We are trusting the platforms to follow these regulations,” and also informed that the focus would be on self-regulation.

The most important highlight has to be the mandate for creating a grievance redressal mechanism. Accordingly, social media intermediaries will be required to appoint a Chief Compliance Officer who will oversee compliance with the IT Act and Rules, a Nodal Contact Person for 24×7 coordination with law enforcement agencies, and a Resident Grievance Officer who will perform the functions under the Grievance Redressal Mechanism. All these officers have to be residents of India.

Social media intermediaries are being burdened with accountability. They will have to publish a monthly compliance report as well, in order to ensure that it is the Indian law that governs the regulation of social media.

Prasad said, “If there are complaints against the dignity of users, particularly woman that exploits their private parts of individuals or nudity or in sexual acts, impersonation, etc, you will be required to remove that within 24 hours.”

The idea here is to compel compliance upon social media intermediaries. Social media giants cannot be allowed to say that they will decide what content is to be removed and what content stays on their platform. Rather, the law of the land will be the ultimate yardstick.

As for tracking the origin of messages, the Indian government has made it clear that it is not interested in the content of the message, but it wishes to know who started the ‘mischief’. This concerns matters of security and sovereignty of India, public order, or with regard to violent or sexually explicit material.

As such, a conscious distinction is being drawn between average-sized tech firms and big tech. This again shows an intent to target social media giants, which have been mired in controversies all across the free world.

The government is also looking to rein in OTT platforms and digital media portals. While the censor board governs film-making in India, OTT has remained completely unregulated. But the draft Rules require OTT platforms to self-regulate and create a grievance redressal mechanism. OTT platforms will also have to self-classify content based on the age of the viewer. These platforms will have to categorise films based on 13+, 16+ and those for adults.

And the draft Rules also make it incumbent upon OTT platforms to bring in the parental lock feature.

As for digital media, the government wants every such online portal to appoint an India-based Grievance Redressal Officer, who shall receive grievances and decide them within 15 days. Further, publishers of news on digital media will be “required to observe Norms of Journalistic Conduct of the Press Council of India and the Programme Code under the Cable Television Networks Regulation Act thereby providing a level playing field between the offline (Print, TV) and digital media.”

For quite some time, there has been a sentiment that legal systems and democratic regimes across the world have failed to keep pace with social media, OTT and other online content platforms. However, India is catching up now and catching up rather quickly. This is an ideal model which other systems must replicate if big tech and other such influential content platforms are to be brought in line with municipal laws.

They lost impeachment trials and their legal suits have no ground, so Democrats begin a witch hunt against Trump, his family and aides