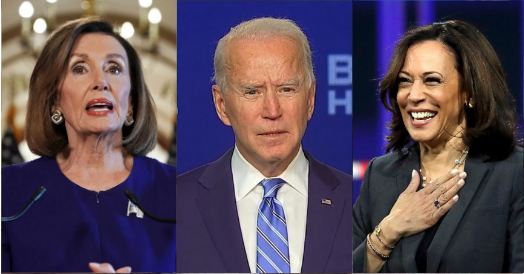 Some of Trump’s biggest supporters on TFIGlobal’s YouTube channel used to predict that the day is not far when American President Joe Biden will be forced to give up the nuclear launch codes to a much-dominant VP Kamala Harris.

However, even in our wildest imaginations, we could not have perceived those prophetic yet doomsday words to come to life and that too so soon. But such is the reality, and a sad state of affairs in America, where a President of the most powerful country on the planet has merely become a pushover that some Democrats can push around like an inflatable volleyball in a swimming pool.

According to a New York Post report, 31 Democrats led by Reps. Jimmy Panetta (D-Calif.) and Ted Lieu (D-Calif.) wrote a letter to Joe Biden asking him to renounce his sole authority on the nuclear launch codes of the country.

“As president, two of your most critical and solemn duties are the security of the country and the safeguarding of its nuclear arsenal,” the letter reads.

While the letter starts cautiously by giving respect to Biden’s authority, it soon brings him down as it states that he cannot be trusted with the code-duties. “However, vesting one person with this authority entails real risks,” wrote Panetta and Lieu in the letter to Biden.

Panetta and Lieu’s fear that one person cannot be entrusted with the launch codes automatically translates into  — “Sleepy Joe cannot be trusted with those codes”. It is important to note that Panetta is the son of Leon Panetta, who served as Defense Secretary and CIA director under President Obama and was the chief of staff to President Clinton. Thus, the demands come from the biggies of Democrats and it will not be easily quashed or swept under the rug.

Fearing that the septuagenarian Biden, who has been sleeping at the wheel for the last one month since the inauguration, will take some irrational calls, the Democrats are pushing their narrative of sharing the codes.

And just to refresh the memories of the readers a bit, these are the same Democrats who ran an extensive, full-blown smear campaign of four years, insinuating that former President Trump was a greater threat to the security of the USA as he had the nuclear codes.

While the Democrats being concerned for the ‘security’ of the country is a noble pursuit, the truth is far from it as they intend to push for the rule of Kamala Harris. You see, giving up launch codes will send a signal that a weak President, who cannot be trusted, is in the White House. In such a scenario, who is the automatic next choice? Kamala Harris.

It was always insinuated in hushed tones by those close to the developments on either side of the political spectrum that Joe Biden was merely a pawn installed for the optics while the real strings were pulled by Kamala Harris. One month in and it seems like the prophecy has already started coming true.

As reported by TFI, when US President Joe Biden was taking a break at Camp David to play video games with his grandchildren, his VP, Kamala Harris, phoned France’s President to address bilateral relations. Although it is very common for vice-presidents to engage in calls made by US presidents to other world leaders, it is rare for them to make calls on their own. This is at least the second time that Harris has done so far.

On February 1, she broke the protocol again and phoned Canadian PM Justin Trudeau to recall her high school years in Montreal and also to discuss “diversity, [COVID-19], climate change and other issues.”

While Kamala is the direct successor to Biden, it is Nancy Pelosi, the House speaker who is performing the administrative, grunt work to make sure that Harris’s enemies are cleaned up. It was Pelosi who engineered both impeachments of Trump and led the crusade against him during the peak of the COVID-19 pandemic.

Even after Trump was acquitted in the Senate trial of insurrection, Pelosi is making sure that Trump cannot stage a comeback. A few days back, she said that Congress will establish an independent, Sept. 11-style commission to look into the deadly insurrection that took place at the US Capitol.

These suicidal proposals, if enacted by the liberal regime of Biden, would surely send a woeful message to allies of America across the planet. However, the likes of Xi Jinping, Iran, North Korea, and other nuclear-armed enemies would be salivating at the prospect of America stripping away the principal power of its President. And that is not the world one would have dreamt of seeing some six months back.

Dystopia? You say. We are already living in it. God bless America and all of its allies.