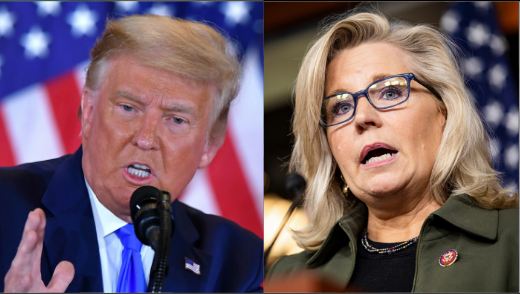 It is often said that during your high time there are many wannabe well-wishers and friends, but as soon as the difficult times arrive they are nowhere to be seen and worse is when they turn against you. Rep. Liz Cheney, who is the daughter of Dick Cheney who was the former Vice President of the United States under George W Bush, is under fire for again making critical comments about former President Donald Trump. The calls for her to step down have gained traction after she split with House Minority Leader Kevin McCarthy (R-Calif.) over whether former President Trump should speak at the Conservative Political Action Conference (CPAC).

Just after Kevin McCarthy said that he thought Trump should speak at the CPAC gathering this weekend in Florida, Cheney reiterated her position that she does not think that the former President should have a place in the Republican Party and alleged his role in the Capitol Hill incident of Jan. 6. This act solidifies the fact that she is just another Democrat rat who has been using the Republican Party all along and is now doing the Democratic Party’s bidding by trying to create a wedge among the Republicans.

On Wednesday, both Cheney and House Minority Leader Rep. Kevin McCarthy of California were asked at a House Republican leadership meeting with reporters, if Trump should have a leading speaking spot at the Conservative Political Action Conference, which is best known for its acronym CPAC. The former President is expected to deliver the keynote address on Sunday at CPAC, the largest annual meeting of conservative politicians and advocates, which remains immensely popular and prominent among Republican voters.

Even senator Mitt Romney changed his tone, realising the stand of the majority of the Republican leaders. In a virtual interview with the New York Times-Deal Book, the Utah Republican said that in the next few years, the former President will play a role in the GOP – assessing that Trump has “by far the biggest influence” in his party.

“I expect he will continue playing a role. I don’t know if he’ll run in 2024 or not. But if he does, I’m pretty sure he will win the nomination,” Romney said.

He added, “I look at the polls and the polls show that among the names being floated as potential contenders in 2024 if you put President Trump in there among Republicans, he wins in a landslide.”

Read more: Mitt Romney’s vote to convict Trump backfired so badly that he has conceded defeat without Trump saying a word.

Liz Cheney is one of the very few leaders of the Republicans who voted to impeach Donald Trump and have still maintained the stand. She is now facing a challenge from fellow Republicans because of her consistent policy of criticising Trump and claiming that Republicans of today are supporting ‘White Supremacists’.

She is even facing trouble back home. The Wyoming Republican Party censured Cheney and the chair of the conservative House Freedom Caucus is urging her to step down from her position as the number three of House Republican in leadership. All these developments signal that the Republicans have realised the lethality of having Cheney lead the party into demise. She has been exposed as another Democrat rat and the Republicans will certainly bid her goodbye.