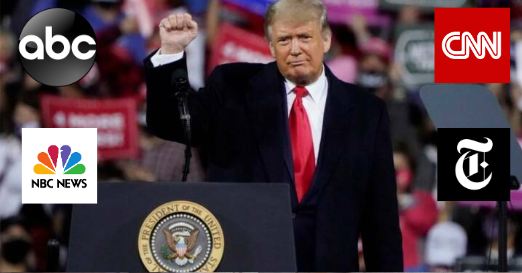 Former President Donald Trump was back on Sunday with a speech at the Conservative Political Action Conference (CPAC) which, to be frank, saw Joe Biden being ripped into for his disastrous first month in office. Jobs, immigration, foreign policy, energy, anti-womanism – you name it and Trump made it a point to tear into Biden on that subject. He also called Biden an “anti-science” crusader who was hell-bent on taking America down the path of socialism. American mainstream media – which is known to have a thing for the Democrats and leftists, however, did not like Trump’s takedown of their master, which is why they are now engaging in a naked display of bizarrity shrouded as op-eds. In their endeavour to vilify Trump, however, mainstream media is really shooting itself in the foot, as with every article or video published by them with the intention of deriding Trump – the man only grows stronger.

Reported by TFI already, every attack on Donald Trump makes him even popular among Americans, who can see right through the lies and biases of the media which has a fetish for free breakfasts offered to it by Democrat presidents in the White House. Therefore, strongly-worded whining of the media, published as editorials or op-eds only work in favour of Trump’s cause.

CNN, for instance, which is the undisputed gang-leader of Democrat-inclined media, took to covering Trump’s CPAC speech with the headline, “Trump unleashes new threat to American democracy.” The compromised media outlet went all hippie on Trump, and tried to call him out for being an “embittered former commander in chief” who was “locked in his false but damaging alternative reality, to which millions of his followers subscribe.”

In an attempt to project Trump as a defeated man, the same said, “Trump’s big comeback speech was a low-energy elegy for his own presidency and an extended whine about Biden’s early policies. His delivery lacked the enthusiasm and sparks of humor that made his speeches compelling political theater early in his 2016 campaign.” As if CNN ever admired Trump’s speeches prior to the 2016 elections, but here we are.

While the New York Times unimpressively tried to debunk the claims of Trump by saying that his “speech was replete with false and misleading claims,” it went over and above itself to defend Joe Biden and his administration – who have made it a priority to render Americans jobless, defang ICE, prostrate before Iran and China and also desecrate all known gender norms.

USA Today, apart from its fair share of typos, managed to publish a sorry piece in which it probed whether Donald Trump was a “declining parody or a terrifying threat”. The publication said, “Trump’s CPAC comeback speech revealed a sad little man, angry at local courts and politicians and disappointed in the federal judges he seated, but who “didn’t have the guts or the courage” to bow to him.”

Another author of the same piece, meanwhile, went ballistic with words as she said, “Fact-checking is a useless exercise for a speech like this one. It was a swollen greatest-hits parade of lies, laughable braggadocio, deliberate double-talk, ugly insults, ugly transactionalism and, from the man who tried to overturn an election, incited a deadly riot and is under investigation in many civil and criminal cases.”

But that’s not all. American mainstream media is a gift that simply keeps giving. For instance, many media houses in the US are currently worked up about how the CPAC, attended by Trump, built a stage which according to them bears an eerie similarity to the Nordic rune used by the Nazis.

“The design of the stage is in the shape of an “Odal rune,” which was used on Nazi uniforms in some divisions of the SS and has also been used by white supremacists in Europe and North America in the years following World War II,” Business Insider said, in a subtle insinuation that CPAC comprises of bigoted “White supremacists”.

CPAC, which for long has been perceived by the American mainstream media and liberals as a far-right cringe-fest, has effectively been turned into a mainstream event that dominates the U.S.’ news cycles. Who made this possible? Short answer – Donald Trump.

As much as the media, Democrats and liberals despise the man, Trump has turned a taboo-like conference of conservatives into an event that hits the headlines – even if for the same old purpose of slandering the 45th President. What the media fails to understand, however, is that Donald Trump is a lotus, which will bloom with as much mud as Democrats and their fourth-pillar stooges throw at him.