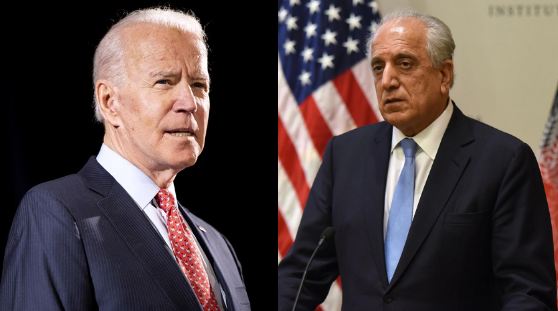 USA’s special envoy for Afghanistan and negotiator for Afghan peace deal, Zalmay Khalilzad has begun a trip to Kabul and Doha to mediate the first-ever meeting between the Afghan government and Taliban representatives under Biden’s presidency. Having worked with the previous administration, Khalilzad is in support of withdrawal of troops from Afghanistan, but Biden has made it clear that US troops are going nowhere and the special envoy is aware of Biden’s policies for Afghanistan.

Khalilzad, who has been the official envoy to Afghanistan for three different US presidents, was the chief architect of the Doha Accord, which was concluded last year and it will require the American troops to be pulled out of Afghanistan completely. According to the deal, only two months remain for the American troops to leave Afghan soil. But as it looks, it will be difficult for the current Biden administration to hasten the process.

The rational consensus dictates that it is the right time for the exit of the US from Afghan affairs. This thinking has been asserted by a US military advisor in Afghanistan for ten years – Carter Malkasian.

After coming to power, Joe Biden in an act of revenge put the hard-fought Afghanistan deal under review which the Trump administration had struck last year.

The American deep state which includes foreign policy eminences and leftist think tank panels are imminent on stalling the pull out process stipulated from May 1. Lisa Curtis who was a part of the Afghanistan team of President Trump took a u-turn when she called the deal “flawed”. But she and other leftist fools forgot that if now the US stalls the peace process and defers the decision to pull out, the Taliban may retaliate violently.

Another army official Colonel Christopher Kolenda, who was part of the team that prepared the Doha process, fired at the Biden administration by saying, “If Biden tears up the agreement, he will own the consequences and the consequences wouldn’t be good.” Experts agree to the fact that the Taliban might resort to a massive offence against America, its allies and the Afghan government if the agreement isn’t respected.

Another longtime advisor on Afghanistan to the US and United Nations, Barnett Rubin, has warned the current administration to not go against the agreed deadline deal as it may lead to “mass-casualty attacks on Americans”.

It is clear that America is weary of the war that has stretched for nearly two decades and has cost it 2,400 lives. Biden, in 2009 as the Vice President, was of the opinion to reduce the number of troops from Afghanistan and focus mainly on exterminating the extremist groups, but his boss Obama instead decided to increase the number of soldiers to 1,00,000.

The Obama strategy to coerce the Taliban bore no fruit and peace never prevailed. It was under the Trump administration that the numbers were reduced and currently stand at 2,500. He had promised during his election campaign that he would “bring American Combat troops in Afghanistan home”. It should be noted that the number of NATO troops in Afghanistan stands at 10,000 including the ones from the US.

Biden’s plan has been described by a US official as a ‘s*** sandwich’. The Taliban forces are unwilling to consider any exceptions as far as the agreed-upon timeline for the US and the coalition forces to leave Afghanistan is concerned. The years worth of hard work done by Khalilzad and his team in bringing peace to the region seems to be getting dismantled. It is quite possible that Khalilzad will ultimately have to leave office under pressure from the Biden administration.

Khalilzad had been the key negotiator under the Trump administration and played an important role in negotiating the Doha Accord. With him in the hot seat again, Khalilzad looks set to uphold Trump’s policies but Biden’s loyalties lie with the deep state and thus he will never agree to the withdrawal of troops out of Afghanistan which would make Khalilzad the first casualty of the incoming war in Afghanistan.

Taxing the super-rich, recurring relief cheques and tax on wealth: Bernie is burning America and the torch is in Biden’s hand