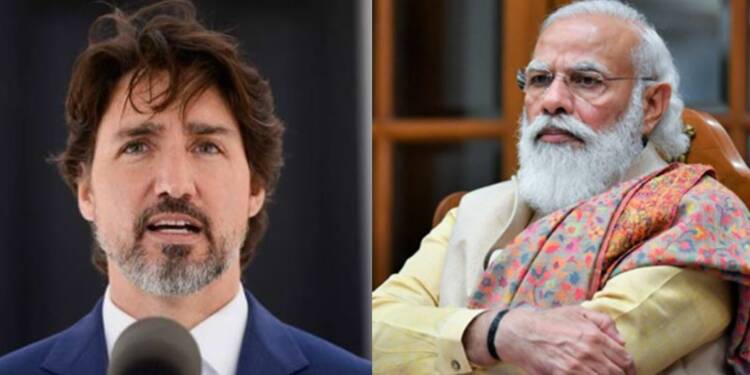 Justin Trudeau, the Canadian Prime Minister is simply exceptional when it comes to making bad decisions. If one needs to gauge the depth of his incompetence, just think that despite being a first world country, Canada has had one of the worst records in providing vaccines for its citizens.

Earlier in February, Canada was faced with a situation where it was not able to procure enough vaccines to vaccinate its population. However, at that moment too, Justin Trudeau was more concerned about politics rather than arranging vaccines. Yet, given the magnanimity of India and Indian Prime Minister Narendra Modi, Canada was promised vaccine shots by the nation.

As part of the promise, the first Canada-bound shipment of Covid-19 vaccines manufactured in India arrived in Toronto on Wednesday morning. Justin Trudeau had made common cause with Sikh separatists or Khalistanis and was utilising their support for his petty politics, but while doing their bidding, he made bilateral relations of Canada and India go bitter. However, with the growing pressure from the opposition party and the people last month, Trudeau had to request Covid-19 vaccines from Indian Prime Minister Modi. The fact that only a while ago he was echoing the concerns of Khalistani separatists adds to the shame that he should have felt.

A consignment of 500,000 doses of the AstraZeneca vaccine, under the brand- Covishield, was sent by the Pune-based Serum Institute of India (SII). It was received by its Canadian partner, Verity Pharmaceuticals, located in the Greater Toronto Area town of Mississauga. Now, the Canadian government is using flowery language to appreciate the help from India.

“The AZ/CoviShield vaccine is now in Canada. The first tranche of 500,000 doses arrived this morning from Serum Institute of India with 1.5 million more doses to follow. Thank you to all whose hard work made this happen. We look forward to future collaboration,” said Anita Anand, Canadian minister of public services and procurement, in a tweet.

It is said that certain people’s lives come full circle quickly, and this is exactly what happened to Justin Trudeau. He was overconfident in Canada’s vaccine production attempts with China, but they failed spectacularly. Adding to the woes, due to high demand in the United States, the delivery of US vaccines such as Moderna and Pfizer had been postponed.

All of these factors, along with relentless criticism from the Canadian opposition, prompted Trudeau to contact Prime Minister Modi and ask if Canada might also get Indian vaccines. Trudeau must have been thinking back to his catastrophic 2018 India tour, during which he brought a Sikh extremist called Jaspal Atwal to a dinner hosted by the Canadian embassy in India.

Read more: Trudeau was forced to eat crow and dump his separatist supporters to get help from Indian Prime Minister Modi.

India is a vaccine powerhouse, producing 60% of the world’s vaccines and housing half a dozen large producers. It is because of this fact that India can deliver vaccines to so many locations in such a short period. By antagonising India for petty political gains, Justin Trudeau has shot in his own foot. He has deteriorated the India-Canada relationship to an extent where even requesting India for the vaccine was shameful enough for the Canadian Prime Minister.

The pandemic has taught an important lesson to Trudeau. No matter how lucrative it would be to support Khalistani secessionist terrorists, Trudeau should have never prioritised it over the bilateral relations with India. As similar to this time, Canada might again need India and at that point in time, Trudeau should not find himself guilty enough to be ashamed to ask for help.