Failing to learn its lesson from Minneapolis, the Biden administration moves to cripple the police in the name of George Floyd 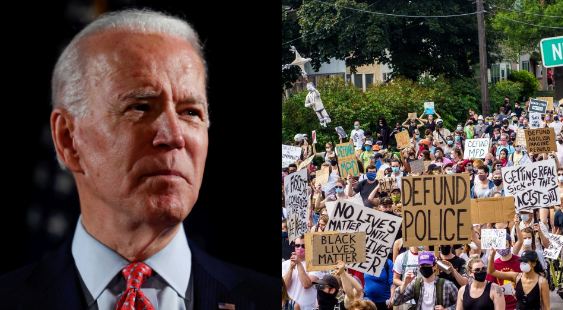 The Democrats once again let their left-leaning agenda take the centre stage as they pushed through the “George Floyd Justice in Policing Act” in the House of Representatives with just ‘one’ Republican vote in favour. The bill has taken inspiration from the ‘defend the police’ movement in Minneapolis and aims to weaken the police force; a grave mistake that Minneapolis had learnt the hard way.

The United States has seen enough violence in the name of George Floyd. Yes, his death was tragic but the Democrats’ left-leaning agents have politicized it and are using Floyd’s name to push their political interests. The bill, if pushed successfully through the US Senate will ensure that the police force in the USA is crippled. And when that happens criminals can take over, as happened in the case of Minneapolis and they had to ‘refund the police.’

Just days before former Minneapolis police officer Derek Chauvin goes on trial on a state murder charge in Floyd’s death last year, Democrats passed the “George Floyd Justice in Policing Act” through the House by a vote of 220-212, with only one Republican voting in favour of it. Representative Lance Gooden, the lone Republican who voted for the bill, later said on Twitter that his vote was a mistake and that he now opposes it.

The bill contains provisions such as limiting grants to local governments that enable police officers to use chokeholds, prohibiting “no-knock warrants,” which allow officers to access a building without first announcing themselves, and requiring law enforcement agencies to provide reports on incidents where officers used lethal force.

Conservative Republicans have slammed the Democratic bill, claiming that it would jeopardise law enforcement lives and make neighborhoods less safe.

One of the most contentious clauses will modify police officers’ “qualified immunity,” allowing for further litigation about the use of excessive force.

This means that police officers who’d use ‘excessive force’ could easily be sued by criminals. But what is the definition of excessive force, how do you define it? Does putting one’s life in danger to protect and secure the community not give the police the right to defend themselves?

But the truth about the so-called police reforms is that they have already been tried and have failed to deliver. ‘Defunding’ and diluting the powers of the police, did not work in Minneapolis. Criminals had taken over the streets, citizens were afraid as there were not enough police personnel to secure the community and the city council was forced by the citizens of the city to start funding the police department again.

Minneapolis’s citizens push makes it very clear that the people never wanted the police to be defunded. It was not even the protests and the unrest over Floyd’s death that led to the defunding of the police department. It was the lack of political support for police and the outright hostility to their continuing presence by the city council led by the Democrat Rep. Ilhan Omar which led to the police being defunded in the first place.

The same thing is happening with this legislation as well. No Republican support for the bill clearly shows that it is a political agenda that the Democrats are pushing without thinking about the consequences. There have been no more calls by the general populace to defund the police. The city which actually defunded the police under pressure from the Democrats has backtracked on the steps it took because they were not in the interests of the community or the state. The Democrats have certainly not learned their lessons and are bent on pushing the USA into a state of lawlessness.