Biden finally realizes that Japan and India are too strong to be bullied, starts damage control 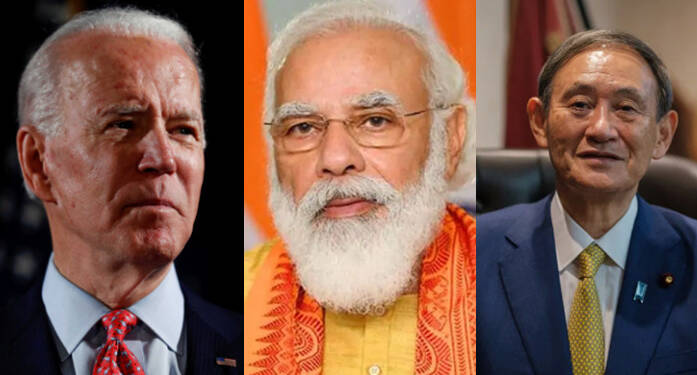 Joe Biden has been on a spree to undo the decisions of former President Donald Trump one by one since the very first day after becoming the President of the United States. Be it in the Middle East, or the Indo-Pacific, he has ended up appeasing the very countries which have the worst to wish over the USA, specifically Iran and China. However, now he has realised that India and Japan are two huge powerhouses and abandoning them will not leave them vulnerable, but it will only end up hurting US interests in the region permanently. Perhaps, this is the reason why he has moved back on his earlier policy direction of offending these two countries and started working with them and toeing the line of his predecessor.

Given the importance of the QUAD in the Indo-Pacific and the realisation of the US President regarding the disastrous initial foreign policy direction of appeasing China and abandoning its Indo-Pacific allies, Joe Biden has had to go the Trump way. In order to redeem himself, Biden has agreed to a meeting of the heads of the QUAD. It will be a first of its sort, where US President Joe Biden, Indian Prime Minister Narendra Modi, Australian Prime Minister Scott Morrison and Japanese Prime Minister Yoshihide Suga will come together to discuss matters pertaining to the Indo-Pacific and it will be held virtually.

Confirmation about the meeting came from the Australian Prime Minister Scott Morrison, who told a news conference that he had discussed the matter with US President Joe Biden, Indian Prime Minister Narendra Modi and Japanese Prime Minister Yoshihide Suga in recent conversations. Joe Biden said in response to a question from a reporter on whether he had received an invitation for the meeting, “So, I am looking forward to that first gathering of the Quad leaders. It will be the first-ever such gathering.

The point to note here is that in the past, the foreign ministers of the four countries were involved in the QUAD meetings. This time, the meeting is being held among the heads of the state of the four countries which is a major development. This clearly shows that the US has revamped its foreign policy vis a vis the Indo-Pacific.

When the first foreign ministers of the QUAD met under the Biden administration in February itself, the foreign ministers of the other three countries had a very strong message for US Secretary of State, Antony Blinken. The message was that if the USA abandons its role as part of the Quad, the Indian and Japanese governments are capable enough to create an anti-China front minus the USA. given the inclination of countries like France, the UK, Germany and Russia to maintain a free and open Indo-Pacific and in a way are willing to contain the ever-growing overbearing of the Chinese Communist Party. The effect of this message was that the Biden administration also had to emphasise “Free and Open Indo Pacific” in its statement, retracting from the Biden administration’s flawed “Secure and Prosperous” Indo-Pacific strategy.

Prior to the rise of China, it was Japan who’s Navy was the pre-eminent powerhouse of the East Asia region and the larger Asia Pacific region. On the other hand, the Indian Ocean Region has largely been India’s backwaters. The combined geo-strategic and naval strengths of India and Japan is not to be messed with. If the USA had abandoned the QUAD, India and Japan were capable enough to replace it with other willing participants. It would have made the US presence and influence in the region unnecessary.

After this, Biden has not only called a meeting of the heads of QUAD but has also taken many other steps which make it clear that the US wants to strengthen its relationship with both India and Japan. According to the report, US Defense Minister Lloyd Austin will visit India this month. The journey is being organised because of the importance of India in the Indo-Pacific region and it is the linchpin in the containment of China. The US knows that if it wants to remain powerful, it will also need powerful allies and thus, cannot ignore India’s growing influence.

The new US Secretary of Defense is also expected to visit other Indo-Pacific countries after he visits India. That means the next country can be Japan. The US will also hold 2 + 2 ministers’ meeting with Japan. According to a report by Asia Nikkei, US Secretary of State Antony Blinken and Secretary of Defense Lloyd Austin will visit Japan in mid-March to meet their Japanese counterparts.

We have already told in our report that both Japan and India have given a message to the US that if there is any objection by the US to show aggression against China, then these two countries will, in their own capacities, look for the interest of the Indo-Pacific. Now India and Japan are clearly seen sitting in the driving seat of QUAD, and in such a situation Biden also has no other option but to support these countries.

China announces that it will create a Polar silk road by 2025. Russia needs to respond