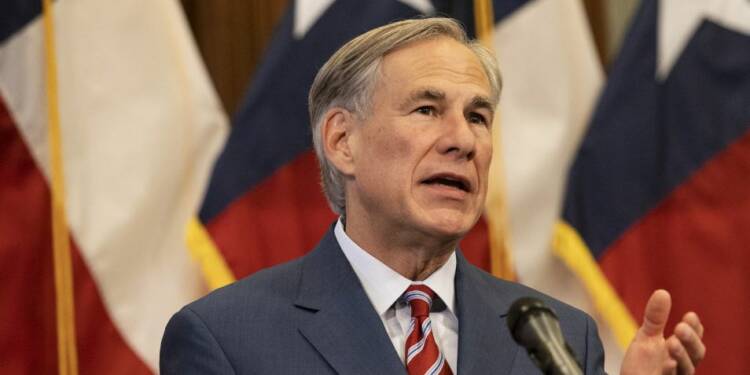 Biden’s policy of accomodating the incoming tsunami of illegal immigrants is mounting trouble on the southern borders of the United States of America. Biden is giving an effective sanction to illegal immigration into the US and is also defanging the Immigration and Customs Enforcement (ICE)- the frontline body for handling illegal immigration. Southern states are looking at issues like higher crime rates and fresh COVID-19 outbreaks. Texas- a red state, is the worst-hit. Yet, Greg Abbott – a Trumpian leader and legend-in making is resisting Biden’s catastrophic immigration agenda.

Greg Abbott, the Governor of Texas, is serving as Trump’s true voice in Texas. He understands that he must protect Texas in face of the immigration agenda that Democrats and the Biden administration are pursuing. So, he is defying Biden’s political will, pressing Texas National Guard into service and the federal administration’s ‘open border policies’.

On Saturday, Greg Abbott announced Operation Lone Star, the purpose of which is “to combat the smuggling of people and drugs into Texas”. Abbott is going to integrate the Texas Department of Public Safety (DPS) with the National Guard. The Texas Governor is looking to deploy air, ground, marine, and tactical border security assets in high threat areas.

Taking a leaf out of the Democrats’ playbook, Abbott is defying the federal policies. In a written statement issued on Saturday evening, the Texas Governor said, “The crisis at our southern border continues to escalate because of Biden Administration policies that refuse to secure the border and invite illegal immigration.”

Abbott added, “Texas supports legal immigration but will not be an accomplice to the open border policies that cause, rather than prevent, a humanitarian crisis in our state and endanger the lives of Texans. We will surge the resources and law enforcement personnel needed to confront this crisis.”

The red state is mobilising all its resources in order to handle the spike in border crossings owing to Biden’s open border’ policies. Biden is unfazed by the mounting criticism against his imprudent border policies. In fact, he has defanged ICE quite comprehensively.

Two Texas detention facilities have, in fact, been converted into Ellis Island-style rapid processing centres. It means that ICE will keep adults and children who cross into the American borders at these facilities for 72 hours and finally release them into the US. This is quite preposterous and virtually means giving an express sanction to illegal immigration.

And the US Customs and Border Protection records a steep rise in the arrival of illegal immigrants through the southern borders, South Texans are already facing the consequences. As per Fox News, communities in this part of Texas are recording an increase in car chases involving undocumented immigrants. Those living in the rural or semi-urban areas in Texas, alongside highways, are bearing the brunt of Biden’s pro-immigration policies.

And then there is always the risk of Coronavirus-infected immigrants entering Texas. A Texas resident, who lives near the border spoke to Fox News on Thursday. Reacting to a report about how over 100 illegal immigrants released by the Border Patrol were Coronavirus infected, the Texan described Biden’s immigration policies as  “truly shameful.”

Meanwhile, Abbott keeps putting up a brave fight against Biden’s open borders agenda. Recently, be even rejected a proposal by the Biden administration for the Federal Emergency Management Agency (FEMA) to partner with Texas for testing incoming immigrants and quarantining those who test positive.

The Texas Governor said, “Instead of doing their job, the Biden Administration suggested it did not have the sufficient resources and, remarkably, asked Texas to assist them in aiding their illegal immigration program. Texas refused.” He added, “We will not aid a program that makes our country a magnet for illegal immigration.”

Abbott also said, “The unconscionable act by the Biden Administration of releasing COVID-positive illegal immigrants in our state puts the lives of Texans and Americans at risk. Border security is strictly a federal responsibility.”

The fact remains that former President Donald Trump had ended his tenure on a high note. He made the US more immune to illegal immigration and made the borders less penetrable. Yet, Biden has taken just a few weeks to effectively opening up the US to an incoming tsunami of immigrants. But Abbott is serving as a true Trumpian. At least in his own capacity, the Texas Governor is taking Trump’s fight against open border policies forward.