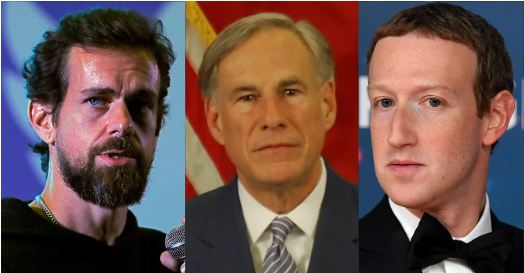 Texas is all set to become the first American state to force Big Tech companies to behave themselves, and not push too hard while stifling the free speech rights of conservatives and shamelessly walking all over them. Announcing the same, the Republican Governor of Texas, Greg Abbott has made it clear that in the current legislative session of the state, he will be wholeheartedly supporting ‘Senate Bill 12’ (SB 12). The said bill is scheduled for its first hearing before the State Affairs Committee on Monday, March 8. Essentially, the bill – which is a brainchild of Sen. Bryan Hughes, prohibits Big Tech companies from depriving Texans of their First Amendment rights.

Senate Bill 12 would prohibit social media companies — including Facebook, Twitter and YouTube — from blocking, banning, demonetising, or otherwise discriminating against users based on their viewpoint or location within Texas. It would apply to anyone who lives in, does business in or has social media followers in Texas. The legislation would allow citizens of Texas to approach the courts in case they feel their free speech rights have been infringed upon by social media companies. The state attorney general will also be empowered to take up the case of such individuals before courts.

For long Texans have been at the receiving end of arbitrary Big Tech censorship for their political views. Being a red state, Texas has always been a target for social media giants. Umpteen number of people have faced suspensions and bans for merely voicing their views on platforms owned by a few billionaires of Silicon Valley. However, Senate Bill 12 is all set to tilt the scales in favour of Texas and its people. In case Big Tech companies continue to act against the people of Texas, the new legislation announced by Governor Abbott can make them liable to cough up court-ordered “daily penalties sufficient to secure immediate compliance.”

Abbott said that the “First Amendment is under assault” from social media companies and that their behaviour “is not going to be tolerated in Texas.”

The Governor said that he looks forward to signing the historic legislation into law, effectively indicating that he expects the bill to sail through the House and State Senate this time around. Last month, TFI had reported that the states of Texas and Florida were getting ready to teach Big Tech a lesson.

While we reported last month that SB 12 was in the works in Texas, it was also pointed out how Florida Governor Ron DeSantis was putting his weight behind a legislation giving consumers the right to know how tech companies are using their data, and also proposed fining tech companies that de-platform political candidates.

Red states like Texas and Florida are particularly riled up after the largely unwarranted banning of former President Donald Trump by social media companies following the January 6 Capitol Hill violence, after which Democrats, liberals and mainstream media conspired to blame Trump in totality for all that had happened. However, Trump being banned by Big Tech had severe repercussions all around the world, as countries took to getting their acts straight, and realised that they too were victims of the monopoly of American social media companies.

Twitter engaged itself in a massive faceoff with the Indian government. However, Prime Minister Narendra Modi forced the Jack Dorsey-led company to bite the dust. Other countries too responded to social media censorship. Poland, for instance, plans to slap 2.2 million Dollars in fine every time social media companies censor lawful posts. Social media companies were also brought down on their knees by Australia after Trump was de-platformed. Similarly, leaders of France and Germany unambiguously opposed Twitter’s decision to ban Trump and criticised Big Tech’s overreach.

If the democratic world and America’s most important states are taking to rein in Big Tech, something must horribly be wrong with it. Texas has taken the lead within the United States to keep the powers of Big Tech and its controllers in California’s Silicon Valley in check. Now, they must either respect the free speech of conservatives or face the music from the red states.