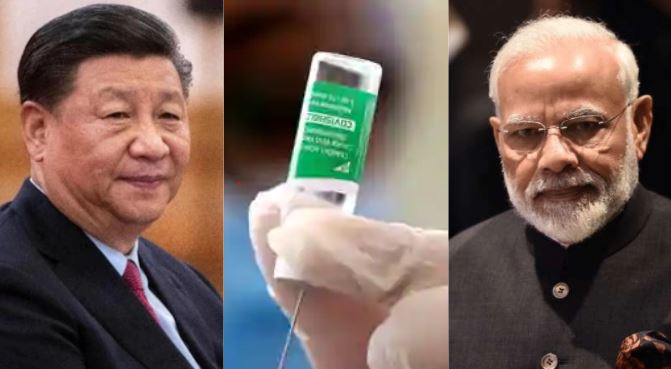 Human life has turned full circle in the last one year. Last year, an Asian giant gave the human race a deadly virus which killed more than 2.6 million people across the globe in a year. But this year, another Asian giant is giving vaccines to heal the wounds inflicted by the virus.

We are talking about India, which is righting the wrongs committed by its neighbour, the People’s Republic of China (PRC). India is a huge powerhouse in terms of vaccine manufacturing vaccines and it is in fact becoming the uncrowned king of the sector, so much so that the entire QUAD wants to support the Indian vaccine industry and find a share in the tremendous goodwill that New Delhi’s vaccine diplomacy is earning.

Consider this- shortly after the Coronavirus pandemic ripped every possible corner of the world, China promised to manufacture sufficient number of vaccines for assuaging the wounds inflicted by the Wuhan virus. But China has failed to keep its words, once again. And it is India which is supplying vaccines to every possible part of the world. In terms of ‘vaccine diplomacy’, India is beating China at its own game.

India is inoculating a major portion of the world, and it is literally saving the planet. Currently, India is supplying vaccines to 65 countries of the world in three categories- under the global vaccine alliance, in the form of grants and aids, and through commercial sales.

Even countries like Pakistan, which shares near-perpetual military tensions with India, and Canada, a country engaged in diplomatic tussles with New Delhi, have received Indian vaccines.

But India is aiming for more- India’s Union Home Minister Amit Shah said that the country is set to meet 70 per cent of world’s inoculation needs. So, if you are reading this, there is a high chance that you were either administered an Indian vaccine or will be inoculated with an India-made COVID-19 jab.

And you would be surprised how India is leading the global vaccination plans, even though it was China which had initiated vaccine diplomacy last year. Today, India is beating China at every single front including cost, time of delivery, efficacy, durability and storage. India is really living up to its reputation as the world’s vaccine hub.

In fact, the signal coming from all parts of the world is that Indian vaccines prevail over their Chinese counterparts. A case in point is Myanmar. The Southeast Asian nation, which shares borders with both India and China, has received 1.7 million vaccines from New Delhi. Meanwhile, China has not yet delivered on its promise of supplying 300,000 doses to the Southeast Asian nation.

There are many reasons why Indian vaccine manufacturers are winning the ongoing rivalry against Chinese vaccine makers. First and foremost, Indian vaccines are more reliable. Beijing remains reluctant in letting its vaccine makers share the critical vaccine trial details. So, recipient countries also fail to build public trust in such jabs.

Also, Chinese vaccines have gained infamy for the apparent lack of efficacy. Even countries that are otherwise friendly with China are not willing to administer such Chinese junk to their citizens.

And then, time of delivery is also crucial. Millions of Indian vaccine reach the recipient-nation even before China moves towards delivering on its promise. So, no one is willing to keep its country waiting.

If you wonder why India is able to game ‘vaccine diplomacy’, it is wholly because of characteristics like quality, cost and timely deliveries. American vaccine makers fail to compete with Indian makers because of cost, while China fails to compete because of quality and time of delivery.

And then, there are other reason also. Indian vaccines are easier to store and don’t demand temperatures as low as say Pfizer. Moreover, there are other advantages like a good safety signal and display of immunogenicity. So, in preferring Indian vaccines over the Chinese ones, the world at large is merely making choosing the better and safer deal.