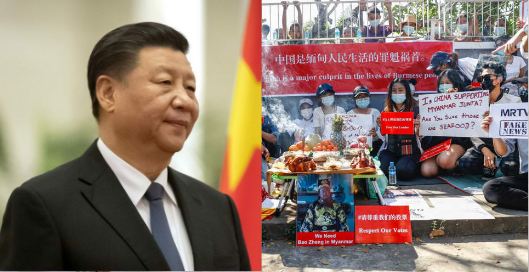 The political unrest in Myanmar, which was the result of last month’s military coup, is becoming a cause of worry for Xi Jinping. The democracy movement in Myanmar is rallying and calling for attacking infrastructure and commercial operations inside the country sponsored by China. The pro-democracy activists are now threatening to disrupt the parallel onshore gas pipelines which connect Myanmar’s offshore fields in Rakhine state to China’s Kunming.

China’s silent support to the military coup in the Southeast Asian nation ever since the Myanmar military seized power is the force behind aggression against anything or anyone Chinese. China has now and again repeated that the coup is an internal affair of Myanmar and demands no interference from outside.

Being a part of the United Nations Permanent 5, China along with Russia is putting a fence on the international calls to impose arms embargo and trade sanctions against the Junta. The UN security council has merely called upon the military to “exercise utmost restraint”.

The above-mentioned gas pipeline is among numerous projects that have been threatened to face attacks from the pro-democracy activists in Myanmar. On social media, the activists are gathering to specifically discuss the targeting of Chinese sponsored projects. A user, while calling out China, said, “If you are still concerned that what’s currently happening in Myanmar is an internal affair, to blow up the natural gas pipeline that passes through Myanmar is also an internal affair.”

Despite the grave concern regarding the safety of human lives, China is still concerned about business and nothing else. Myanmar’s local media called ‘The Irrawaddy’ reported that Beijing recently held an emergency meeting with officials from Myanmar’s Home Affairs and Foreign ministries. The Chinese foreign ministry wanted to be assured of the safety of its valuable investment in Myanmar. China asked Myanmar’s Junta to protect the Myanmar-China oil and gas pipeline at all cost between the skyrocketing anti-Chinese sentiment across the country.

Myanmar’s pro-democracy activists challenged the Chinese government in an open letter that was posted on social media. The letter stated, “If you do not stop supporting the unofficial military Junta, Myanmar-based Chinese businesses must be collapsed soon including the gas pipeline projects.”

Not only the individual activists but non-governmental organisations like ‘Justice for Myanmar’ have been raising their voices and calling private businesses which are indirectly connected to Chinese businesses to sever those connections immediately.

Many experts on Myanmar have pointed to China’s hand in the military coup as well. They suggest that the ousting of Suu Kyi’s National League for Democracy and the return of authoritarian Junta back to power would belittle Myanmar’s shift towards a democratic alliance with the US. It should be noted that Chinese state propaganda media Xinhua had called the coup “a major cabinet reshuffle”. Historically, China has favoured a disruptive rule in Myanmar even during military rule. It has given military and financial backing to the anti-government Burma Communist Party and secessionist movements in northern regions bordering India.

There are numerous revolutionary movements right in India’s neighbourhood, in Pakistan. The independence movements in the areas of Pakistan Occupied Kashmir and the areas of Gilgit Baltistan, Balochistan and Sindh. Among the above mentioned, the revolutionaries are opposing the Chinese incursions into their homeland. The China-Pakistan Economic Corridor (CPEC), which runs from sensitive areas of Balochistan and Sindh to Chinese occupied East Turkestan, has added to the already boiling separatist movements.

The Sindhi people with their demands of a separate Sindhudesh see the CPEC as a tool to further deprive the native Sindhis of their culture and traditions. They believe that the project will promote already rising Punjabi imperialism in Pakistan, which will deprive the native Sindhis to have a say in the affairs. The experts have warned Pakistan that a colony like treatment of Sindh and Balochistan might develop into a situation similar to what happened with East Pakistan (Bangladesh) in 1971. Similar voices are now being raised against China in Myanmar.