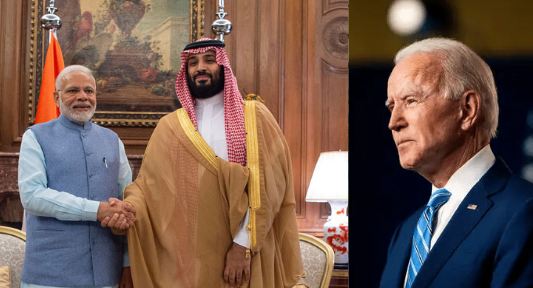 The importance of Mohammad bin Salman for the future of a transformed Kingdom of Saudi Arabia and the peace and stability of the Middle East cannot be overstated. And the fact that Joe Biden and the Democrats have attempted to unseat him, is also common knowledge.

While we have earlier seen the Arab nations and Israel standing shoulder to shoulder with MBS and Saudi Arabia, now Indian Prime Minister Narendra Modi too has sent a clear message to Biden, that is, stop trying to unseat Saudi Crown Prince MBS.

Prime Minister Narendra Modi and Saudi Arabia Crown Prince Mohammed bin Salman bin Abdulaziz Al Saud discussed bilateral ties between India and the Gulf nation during a phone call on Wednesday. The two leaders agreed on continued support for each other against the coronavirus disease (Covid-19) pandemic. As per the Indian Prime Minister’s Office press release, Modi reiterated his invite to the Crown Prince to visit India at an early date.

Arab nations and Israel have already shown their interest in building a united military front minus the United States. And now after them, India has signalled to the US administration that New Delhi is in no mood to support Biden’s disastrous Middle East policy and it stands clearly with Saudi Arabia as a fellow partner with stakes in the peace and stability of the Middle East as well as the possible renaissance of Islam by MBS and Saudi Arabia.

US President Joe Biden’s Middle East policy has turned out to be quite a catastrophe. The sitting US President tried to “recalibrate” the American relationship with Riyadh. And this plan of recalibration has resulted in straining the alliance between Washington and Riyadh, or at least, it has bruised it irreparably.

Biden reached out to King Salman and downgraded ties with the Arab power’s de facto ruler, Crown Prince Mohammed Bin Salman. So, Biden wanted to delete the legacy of the last few years in which Mohammed Bin Salman became the overarching power centre in Riyadh. Biden’s plan to unseat MBS is nothing less than a recipe for disaster. Mohammed Bin Salman exerts a lot of influence in Riyadh as well as in the Middle East at large.

Now, if Biden is going to scale back the advances made by the Trump administration, Mohammed Bin Salman (MBS) too would feel compelled to react. He will do two things- firstly, if Biden undermines the US-Saudi relationship, then MBS will himself reduce the level of proximity with Washington. And secondly, the Crown Prince will understand the challenges posed to his internal hegemony in case a man as powerful as Joe Biden tries to undermine him.

Read more: Challenging MBS and trying to unseat him is a dangerous proposition for the USA as the consequences could be grave and immediate.

PM Modi, by reiterating the extension of the invite to MBS, have made it clear that they want nothing to do with the dangerous games Joe Biden is playing. Joe Biden in an effort to exert his power is trying to play hard on US allies as he is not ballsy enough to take on the rivals directly and India does not want to be part of this disastrous policy direction of the USA.

India has made it clear to the USA, that if Biden tries any further to unseat MBS and destabilise the Middle East, New Delhi will stand solidly with the Saudis, other gulf countries and Israel. The telephonic conversation comes almost six months after their previous call in September last year when the two leaders discussed the challenges due to the Covid-19 pandemic.

So, the two leaders reiterated how serious they are about the COVID-19 pandemic. And in the wake of the pandemic, Modi and Crown Prince Salman vowed continued support in the spirit of the special friendship and people-to-people links between India and Saudi Arabia.

These developments coming just before the meeting of the Quad and at a time when the USA is increasing its wedge with the long-standing, strategic, traditional allies of the region mean something significant. These are too perfectly placed to be a coincidence and the fact that the telephonic conversation happened at the time when it did, means that India wanted to convey a crystal clear message to the Biden administration and it has certainly done that.