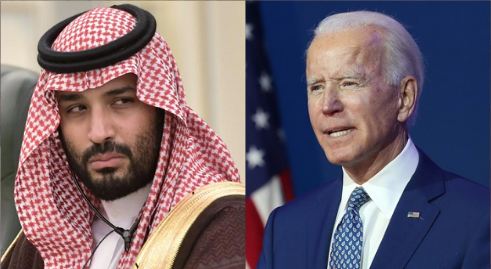 US President Joe Biden’s Middle East policy is turning out to be quite a catastrophe. The sitting US President now intends to “recalibrate” the American relationship with Riyadh. And this plan of recalibration will either end up extinguishing the alliance between Washington and Riyadh, or at least, bruise it irreparably.

Biden plans on reaching out to King Salman, and downgrading ties with the Arab power’s de facto ruler, Crown Prince Mohammed Bin Salman. So, Biden wants to delete the legacy of the last few years in which Mohammed Bin Salman became the overarching power centre in Riyadh. This is going to have some severe geopolitical repercussions in the Middle East region, which will ultimately take the shape of serious setbacks to the US interests in the region.

Biden’s plan is nothing less than a dangerous game. Mohammed Bin Salman exerts a lot of influence in Riyadh as well as in the Middle East at large. This is why Donald Trump established very close ties with the Crown Prince after taking his first trip to Saudi Arabia as the then US President.

Now, if Biden is going to scale back the advances made by the Trump administration, Mohammed Bin Salman (MBS) too would feel compelled to react. He will do two things- firstly, if Biden undermines the US-Saudi relationship, then MBS will himself reduce the level of proximity with Washington.

So, the repercussion is that a major power like Saudi Arabia will depend more on regional powers at the expense of its relationship with the US. Consequently, the US might lose an ally and a major source of influence in the conflict-prone region. The Biden administration is already alienating Israel. Now, if the relationship between the Sunni kingdom and Washington also falls apart, then the US will virtually get pushed out of the region.

And secondly, the Crown Prince will understand the challenges posed to his internal hegemony in case a man as powerful as Joe Biden tries to undermine him. So, MBS will look out for threats posed by other members of the royal family and quell any coup attempt to unseat him. If MBS can quell a coup attempt, then the consequences will be quite painful for the sitting US President.

Apart from the bilateral ties between Saudi Arabia and the US, it should be kept in mind that MBS is a major proponent of the Abraham Accords. He is the one who silently and subtly supported peace deals between Arab nations like Bahrain, the UAE and Sudan with the Jewish State of Israel.

MBS is far more shrewd than what the Biden administration seems to think about him. He knows how to handle the radical element. He is injecting progressive ideas like removing antisemitism from Saudi Arabia and at the same time handling the radical element facing him rather deftly.

If Biden thinks that he can get away with undermining MBS and cozying to King Salman so easily, then he is grossly mistaken. MBS is a proponent of pro-US ideas like greater acceptance of Israel, while King Salman is not such a major proponent of Israel.

In case Biden is successful in undermining the Crown Prince, the world at large would be looking at the resurgence of an anti-Israel Saudi Arabia. There are leaders like Saudi Foreign Minister, Prince Faisal bin Farhan Al Saud, who harbour a deep sense of prejudice against Israel. If and when MBS gets undermined, they will again expand the sense of antisemitism in the Sunni Kingdom.

Biden has some disastrous plans for Saudi Arabia. These plans can spell a geopolitical disaster for the Biden administration and also destabilise the Middle East as a whole.