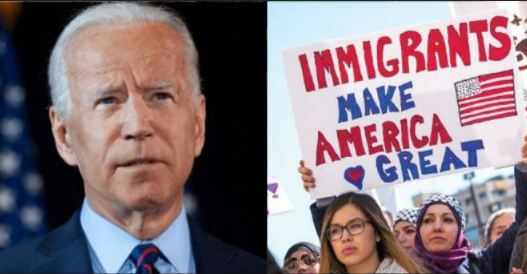 US President Joe Biden’s immigration agenda is now facing a severe backlash within the United States. Now, Biden’s latest decision to end the Trump-era ‘public charge’ rule has led to a major controversy all over again. A group of eleven states has even filed a motion challenging the Biden administration over its decision of ending the ‘public charge’ rule to regulate immigration into the United States of America.

The ‘public charge’ rule was one of Trump’s many policy decisions that restricted green cards for immigrants who were deemed likely to be dependent on welfare. The intent was that welfare should be limited strictly to American citizens and incoming immigrants should be financially self-sufficient if they want US citizenship.

Yet, Biden wants to end the ‘public charge’ rule. The present American administration is infested with the radical left ideology and therefore it is looking to create a system in which American taxpayers’ money is used for the welfare of incoming immigrants. Worse still, there is a plan to let such immigrants obtain permanent residence or even American citizenship.

In fact, the leftist lobby within the Democrats had started pushing back against the ‘public charge’ rule as soon as it came into force. Immigration advocacy groups and advocates even challenged the Trump-era rule. However, the Biden administration abandoned the defence of the ‘public charge’ rule, as a precursor of its invalidation.

The motion against Biden’s decision to end the ‘public charge’ rule is led by Arizona Attorney General Mark Brnovich. In a statement issued on March 11, Brnovich said, “It is unconscionable to overwhelm our infrastructure and immigration personnel when we are dealing with the health and economic devastation of the pandemic.”

The Arizona Attorney General added, “While regardless of one’s position on immigration reform, this reckless violation of federal law is only creating another national crisis and putting additional strains on our state and hardworking Arizona taxpayers.”

The main concern is, of course, the cost component behind Biden’s imprudent move to end the Trump-era policy. Brnovich’s lawsuit estimates that about $1.01 billion would be “foregone savings in transfer payments for all states annually,” as a result of Biden’s decision to trash the ‘public charge’ rule.

Meanwhile, the Department of Homeland Security (DHS) has made it clear that it would revert to the Clinton-era rules that directed officials to deem immigrants’ public charges if they received government cash benefits or long-term care in medical institutions.

The statement issued by DHS, read, “Under the 1999 interim field guidance, DHS will not consider a person’s receipt of Medicaid (except for Medicaid for long-term institutionalization), public housing, or Supplemental Nutrition Assistance Program (SNAP) benefits as part of the public charge inadmissibility determination.”

But how does this make any sense? If immigrants reliant on cash benefits cannot be allowed to obtain green cards, then why should a different rule apply to those who sustain themselves on welfare? The same principle should also bar them from obtaining green cards.