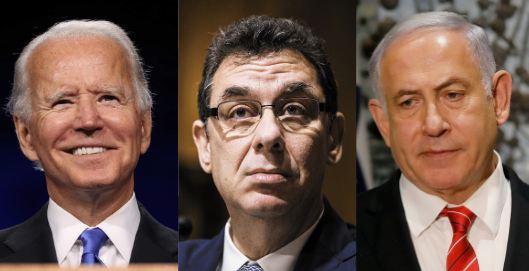 US President Joe Biden’s elevation to power in the White House is politicising the Coronavirus pandemic and even the vaccination campaign. We are talking about Pfizer CEO Albert Bourla’s decision to cancel his Israel visit. The reasons behind the cancellation of Bourla’s visit reek of sheer politicisation.

Pfizer CEO had to visit Israel for discussing plans to establish a Pfizer manufacturing site in Israel. The visit was being watched closely given Israel’s success in its ongoing vaccination campaign. Yet, Bourla, who shared a tense relationship with former US President Donald Trump, has cancelled his Israel visit. Interestingly, the cancellation seems to be helping Biden who wants to get rid of Netanyahu, as the Israeli PM was considered Trump’s friend.

Bourla is not fully vaccinated. This is the official reason behind his decision to cancel the Israel visit. Yet, within Israel, there were a number of other issues.

The Achrayut Leumit (national responsibility) movement, a breakaway faction of Israeli Prime Minister Benjamin Netanyahu’s Likud Party, shot off a letter to Bourla, Netanyahu and Israel’s State Comptroller and Ombudsman Matanyahu Englman on Wednesday. The letter urged the Pfizer CEO to cancel his visit. The Achrayut Leumit CEO Oshi Elmaliach reasoned, “Mr. Bourla’s participation in photo-op events with the prime minister may constitute aiding and abetting a prohibited election campaign and is a criminal offense.”

We don’t know if Bourla not being vaccinated is the real reason behind him not travelling to Israel or not. After all, unvaccinated people across the world are going on international visits. Anyhow, if the Pfizer CEO has cancelled his visit owing to the undue pressure being exerted by anti-Netanyahu elements within Israel, then it certainly means that big pharma is getting politicised.

Throughout much of the last year, Pfizer had kept arguing that it won’t let its vaccination programme get politicised. But there have been way too many instances when the vaccination campaign actually got embroiled in political controversies. In July last year, Trump wanted to meet pharma CEOs, but the meeting never materialised as the big pharma representatives declined to attend it. Bourla had then said, “I don’t think there is a need for, right now, for White House meetings.”

Even during the US Presidential polls in November last year, the pharma industry, which used to be pro-GOP in the past, decided to back Joe Biden in terms of fundraising. So, willingly or unwillingly, big pharma did get politicised.

And to make things worse, Pfizer announced that its vaccine is more than 90 per cent effective, shortly after the American media declared Joe Biden as the US President-elect. This even prompted Donald Trump Jr. to tweet, “The timing of this is pretty amazing. Nothing nefarious about the timing of this at all right?” Bourla did hit back saying that his company was “not working with the election as a timeline” and that they relied on the “speed of science”.

Yet, for the rest of Trump’s tenure, it became clear that the then US President and Pfizer or even big pharma, in general, did not share the most cordial of relations. In December, Pfizer and Moderna declined invitations to a ‘Vaccine Summit’ hosted by the Trump administration at the White House.

To be frank, Pfizer and Trump always shared a bruised relationship. In 2018, for instance, Trump had said that Pfizer should be “ashamed” for increasing prices and taking advantage of poor people. In fact, lowering drug prices was a priority for Trump, which big pharma would have definitely despised.

Biden and Pfizer, on the other hand, share really good equations. Last month Biden toured the Pfizer manufacturing plant and claimed, “I had an opportunity to see the COVID-19 vaccine production process up close and thank the workers for their tireless efforts – because of their hard work we’re going to beat COVID-19.”

On Friday, I visited Kalamazoo, Michigan to tour a Pfizer manufacturing plant. I had an opportunity to see the COVID-19 vaccine production process up close and thank the workers for their tireless efforts – because of their hard work we’re going to beat COVID-19. pic.twitter.com/tt0vYyskE9

That being said, there are clear dangers of the Biden administration mixing up vaccination and geopolitics. At the end of the day, Netanyahu is seen as Trump’s ally and Biden’s enemy. If the Pfizer CEO cancels his Israel visit, it not only helps the Israeli opposition, but also Joe Biden.

There is an ongoing competition between Biden and Netanyahu, and it seems that Biden wants Pfizer to back him instead of freely cooperating with a US ally in the vaccine sector.