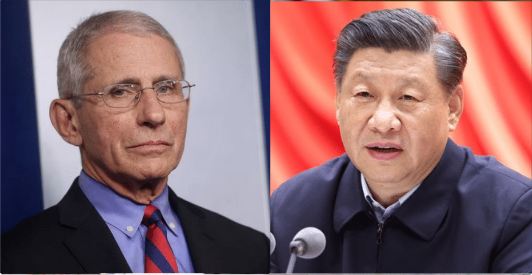 Many things spark a lot of confusion, and whether Dr Fauci prioritises being a doctor or a representative of interest groups is one of those things.  After failing to give the right suggestions to the government and the people of the United States of America and trying to be a mainstream media darling, Dr Fauci has now become the unofficial spokesperson of China’s COVID-19 efforts, achievements and vaccines.

The top US infectious disease expert and chief medical advisor to President Joe Biden, Dr Fauci appeared with top Chinese epidemiologist Zhong Nanshan in early March during an online forum hosted by the University of Edinburgh. It was their first public event together over the issue. In nearly an hour-long video panel themed around “the future of health,” both of them repeatedly highlighted the need for collaboration between the USA and China, a message that Chinese authorities have frequently adopted to fend off criticism of their initial coverup of the outbreak.

Earlier, the Democrats waged a war on Trump’s handling of the pandemic and were actively aided by Dr Anthony Fauci, Director of the National Institute of Allergy and Infectious Diseases, who has served under six Presidents. Interestingly, when the pandemic first struck America, Fauci’s statements were pretty much in line with those of Donald Trump. However, with time and the presidential elections approaching, Fauci decided to play the rebel and started countering and criticising the Republican President on all counts.

Read more: How much of a role did Fauci play in the eviction of Donald Trump?

Zhong, dubbed as “China’s Fauci” by one Chinese official, rose to international fame after assisting the regime in managing the SARS epidemic that began in the country in late 2002. He has defended the Chinese government’s handling of the COVID-19 pandemic.

During the event, Zhong credited the regime’s tough on-time policies of China and having “the fewest” COVID-19 infections and deaths relative to the rest of the world. However, critics and leaked internal documents have criticised the regime’s official COVID-19 estimates, claiming that they are vastly undercounted and instead of dealing with the pandemic many atrocities have been perpetrated by the CCP.

Later in the event, Dr Fauci revealed where his loyalties lie as he heaped praises for China’s handling of the pandemic and overlooked all the excesses and the very fact that it originated in China. Fauci said, “I will emphasise everything Professor Zhong said.”

During the talk, he added, “We are all in it together, every single nation. To highlight what both of us said, if we don’t fully eliminate this, we’ll continue to be threatened by versions, which have an unpleasant habit of biting us.”

At no point in time, Dr Fauci tried even his slightest to refute the false claim that Prof Zhong was making things up and played along, legitimising all that was said. The two did not discuss the Chinese regime’s attempts to conceal the epidemic or its continuing efforts to redirect responsibility and thwart legitimate impartial inquiries into the virus’s source at any point during the panel. Moreover, he also didn’t question the human rights abuses in China or even the opaqueness regarding the way in which the Communist nation has dealt with the virus, or even the botched up enquiries by the WHO.

As per a report by The Epoch Times, Peter Navarro, the former head of the National Trade Council, said, “The Chinese Communist Party purchased and paid for Dr Fauci.” Dr Fauci is thus making his priorities clear, and yet again he has disappointed many people.