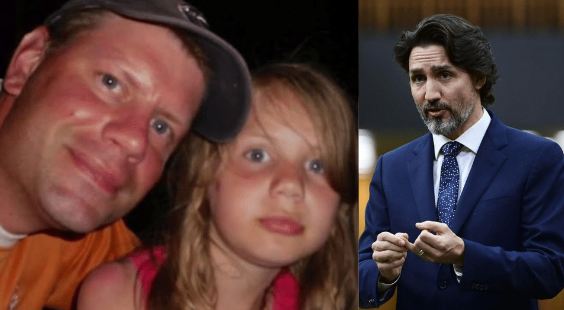 It is bewildering to believe that kids are mature enough to make a decision that could have all kinds of effects and implications in their own life. The truth is they cannot and that’s why parents are supposed to help them and guide them and prevent them from making such decisions. But not in Canada, as Canadian Rob Hoogland, father to a teen daughter, has been taken away from his daughter for preventing her from undergoing a sex change operation at the age of 14. Moreover, he could also face a jail term for addressing his daughter as ‘her’.

Rob, whose daughter had wanted to be a boy since she was in seventh grade, believed she was too young to make the medical decision to change her gender at the age of fourteen. Doctors, school officials, and now the Supreme Court concluded that her father lacks the power to make such a decision and that he must continue to refer to his daughter using “his” correct pronouns or face legal consequences.

After seeing the pro-transgender film “Handsome and Majestic” at school, Hoogland’s daughter began to identify as a male, according to his first court filing (which has since been deleted from the internet).

Hoogland’s daughter told him that she would be listed in the seventh-grade yearbook under the name of a boy instead of her own. Hoogland was enraged at school administrators for endorsing what he considered to be a lie, and he shared his disappointment at the time.

Much to his dismay, it was later revealed in a court affidavit that the school counsellor had made the adjustment in the yearbook and several meetings with the ‘boy’. Her school was the one that began to pressurize her to change her gender. The child’s parents were not aware of the changes, according to British Columbia’s Sexual Orientation and Gender Identity (SOGI) law. The school also went above and beyond to accommodate the girl, referring to her by her new male name and allowing her to use the male-only restroom.

Hoogland is scheduled to be arrested on Tuesday for breaching the court’s terms, which prohibit him from speaking out about doctors’ and school counsellors’ heinous acts, as well as the Canadian justice system, which has stripped him of his parental rights.

Hoogland is facing up to five years in prison for preventing his daughter to act on a whim. Teenage is a crucial stage of development where a child can feel a lot of things and experience new and different kinds of feelings and expressions. But that does not mean that they can act on it. Acting on whims and feelings is as immature a decision as it can ever be.

We are not our feelings, feelings do not define an individual nor should they be the precursor to necessitate change. Especially as big as getting a sex change operation. An action that could have severe repercussions on a child’s future must be avoided until the child is old enough to make a decision, to understand the severity of his/her actions and understand the consequences. Teens fantasize about things as it is an age of discovery and fantasies but it is the responsibility of the parent to keep those fantasies in line with reality and Rob was fulfilling his responsibility as a parent.

Meghan Markle, the attention seeking princess, is now cosying up to Democrats to kickstart her political career