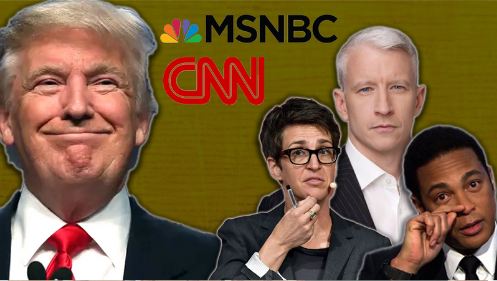 The first numbers have started trickling in. What numbers, you may ask? The viewership ratings of American mainstream media for the post-Trump era are here, and they are no good news for the left-leaning media which for the past four years has solely relied on Trump-bashing to somehow remain relevant in the country. Although their darling, President Joe Biden has now come to occupy the Oval Office, the revenue flow of liberal media, particularly the likes of CNN and MSNBC is about to take a big hit. What’s worse for them, and good for the American patriots, however, is that there seems to be no respite from the viewership slump for at least the next two years.

According to a VIP analysis detailing viewership patterns seen in the first week of March, in comparison to those recorded between November 30 to December 4, 2020; CNN and MSNBC took the worst hit. As is evident, the comparison in ratings was done between the pre-Biden and post-Trump era. The size of the audience watching “CNN Tonight with Don Lemon” between March 1-5 was down by -32.5 per cent. According to the report, “Anderson Cooper 360” had its average audience decrease by -32.2 per cent, while “Cuomo Prime Time” saw a -28.5% decrease.

Double yikes, if advertising $$ is your thing. pic.twitter.com/jSTKp5AaOm

While the decline in CNN viewership was the sharpest, MSNBC was not very far behind, as it too recorded a double-digit negative decline in the same time frame. VIP reported that “All in With Chris Hayes,” featured on MSNBC, had its audience reduce by -16.7 per cent, and “Last Word with Lawrence O’Donnell,” also on MSNBC, had a decrease of -17.6 per cent. Speaking of primetime viewership, that is the 9 PM slot, both CNN and MSNBC have a lot to worry about. The comparison of primetime viewership of the two networks during the impeachment trial of Trump, as opposed to when the same was over, is sure to make the celebrity hosts and their political masters break into a bout of tears.

“Cuomo Prime Time”, hosted by New York Governor and sexual molestation accused Andrew Cuomo’s brother – Chris Cuomo, saw a -31.3 per cent decrease after the impeachment trial was over. The show had seen a brief 7.7 per cent upswing during the impeachment circus. “The Rachel Maddow Show” on MSNBC experienced a similar trend, with a 10.1 per cent boost during impeachment week, but a -22.3 per cent audience nosedive after the trial ended. Interestingly, Fox News was least affected in terms of viewership metric after Donald Trump left office in January 2021, and witnessed only single-digit drops in viewership, which can be attributed to the calming of political rhetoric in the country after an intense election season.

Read more: American media’s Trump problem and why they will help him win the 2024 election

What is also intriguing is that Fox News clocked the highest viewership during the primetime address of President Biden last Thursday. According to Nielsen Media Research ratings data, from 8 to 8:30 PM, while the president spoke to the nation about the coronavirus pandemic, Fox News pulled in an average of 4 million viewers — 613,000 of whom were in the advertiser-coveted age demographic of 25 to 54. CNN was in third place with 2.729 million total average viewers. MSNBC had the second-highest total average viewers during the half-hour, 2.982 million, but was a distant third in the 25-54 demographic, with only 395,000 viewers.

While Fox News has been labelled as the devil-incarnate and its primetime host Tucker Carlson is being hounded for his truthful coverage of issues that matter the most to America, his colleagues at CNN and MSNBC are fighting a battle of existence. For four long years, a relentless, fallacious and malicious anti-Trump campaign has been run by American media, which has a fetish for free dinners and champagne parties thrown around by Democrat presidents.

Now, having made anti-Trump tirades a daily addiction for braindead liberals in America, mainstream media led by the likes of CNN and MSNBC suddenly find themselves lacking content to flash on TV screens, since taking on the Biden administration is evidently a non-starter. As such, liberal audiences have begun getting bored with their media cheerleaders, a trend which has manifested itself in the form of this month’s ratings.