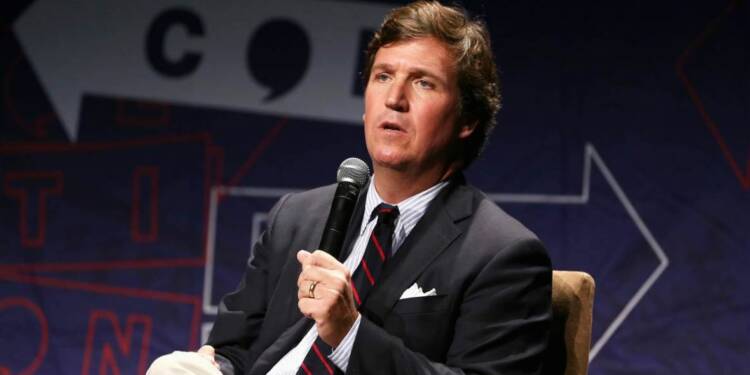 The extreme Left and their collaborators in the Democratic Party are redefining what free speech is, and the new definition is not at all pretty. You are free to express your opinion, if and only if the Left agrees with you. The latest incident involving Tucker Carlson gives a practical example of this rule.

It is not a hidden fact that Tucker Carlson is an American patriot in all of its definitions. He provides a voice to the people who have been ostracised, called names and left with no one who listens to them. But now, he is being hounded by the Left and the Democrats for voicing his concerns and giving an articulate argument for a large section of the American population.

On his show, Tucker Carlson slammed Joe Biden for bringing identity politics into military policy and encouraging “maternity flight suits.” The talk show host said that the military’s primary goal is to win battles, not to promote social justice.

He expressed his scepticism with the notion that pregnant women increase the efficiency of the military. During a segment on the 10th of March, Carlson said, “So we’ve got new hairstyles and maternity flight suits… Pregnant women are going to fight our wars. It’s a mockery of the US military.”

“While China’s military becomes more masculine … our military needs to become, as Joe Biden says, more feminine,” Carlson continued. “It’s out of control and the Pentagon’s going along with this. Again, this is a mockery of the US military and its core mission, which is winning wars.”

However, how the Democratic establishment hounded him, makes it the perfect case of countering argument by hate. They are trying to silence Tucker Carlson not by counter reasons, but by calling names and cancelling him and when one would have thought it cannot be any worse they brought in the military to do their bidding.

An institution whose sacredness is determined by the disciplined act of not getting dragged into politics has been used to push the post-moderns and the Left’s political agenda and this has come at a huge cost. Sen. Ted Cruz (R-Texas) said that he has requested a meeting with the head of the US Marine Corps after one of its units tweeted statements insulting Tucker Carlson, along with unusually bellicose comments about the Fox News host.

Over the weekend, a US Marine Corps unit’s Twitter account—the II Marine Expeditionary Force Information Group—stated that it “messed up” in its comments when responding to Carlson after the Fox host said the military should be focused more on adversaries like China rather than on social issues.

“We are human and we messed up. What was intended as a tweet in support of our female Marines and sisters serving in uniform were clearly not aligned with our standard practices or an appropriate representation of the Marine Corps. We will do better and serve the people,” the Marines unit added.

However, the damage is done, and in the confusion, the only winner that is left is the one that has a sole agenda of breaking America and its proud practices. It will need a lot more from the military and the Marines unit to cover up for the damage.