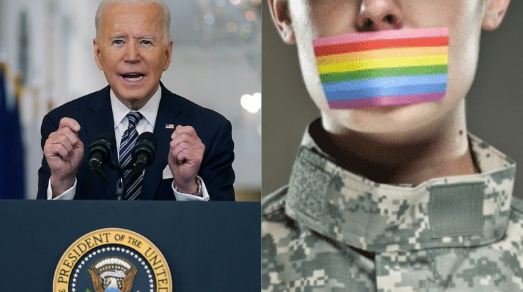 Read More- The Equality act– a bill that will make the biological definition of gender ‘invalid’.

The military “thrives when it is composed of diverse Americans who can meet the rigorous standards for military service, and an inclusive military strengthens our national security,” according to Joe Biden’s executive order.

Biden stated, “It is my conviction as Commander in Chief of the Armed Forces that gender identity should not be a bar to military service”. Adding further, “Moreover, there is substantial evidence that allowing transgender individuals to serve in the military does not have any meaningful negative impact on the Armed Forces.”

Free gender reassignment surgery will be added to the military benefits programme, according to new Department of Defense memos.

Secretary of Defense Lloyd Austin wrote, “This revised policy will also ensure all medically-necessary transition-related care authorised by law is available to all Service members.”

Rep. Jim Banks (R-Ind.), an Iraq War veteran who serves on the House Committee on Veterans’ Affairs, supports transgender people in the military but opposes taxpayer funding of sex-change surgeries.

He says, “This is radical and new territory for a presidential administration to force taxpayers to fund sexual reassignment surgeries for those in the military. I’m compassionate toward those individuals who want to undergo an elective surgery of this nature, but taxpayers shouldn’t be on the hook to pay for it. It’s constitutionally dubious that Congress hasn’t passed these measures, but the administration, in a radical way, is pushing through this agenda. I sit on the committee that should debate these issues.”

Since Joe Biden took to office, he has made statements and signed executive orders at the cost of societal gender norms. Moreover, Biden’s pick for the Assistant HHS secretary is also a transgender who is a strong advocate of sex change operations in children.

In his first week in charge as President, Joe Biden removed the concept of gender in women sports allowing transgender females, with physical attributes of a male, to compete in women sports which has dismayed women athletes all over the US.

Future implications of abolishing the gender concept could spill out to other parts of the society which would be damaging to the women’s rights associations who have come so far in their struggle to create a positive environment for women.

Biden’s agenda, as displayed by his little time in office, indicates two things – reversing Trump’s policies and stamping his mark on societal norms. By doing both, he is chafing the societal fabric. Laws should be made to protect people against discrimination on a similar platform.

This decision would further put pressure on the American taxpayer. As if the pandemic was not enough, Joe Biden has also vowed to legalise 11 million illegal aliens in the country which would mount further pressure. Biden must understand while it is a good cause to lift the marginalised, but doing so at the expense of the majority will tear the social fabric apart.