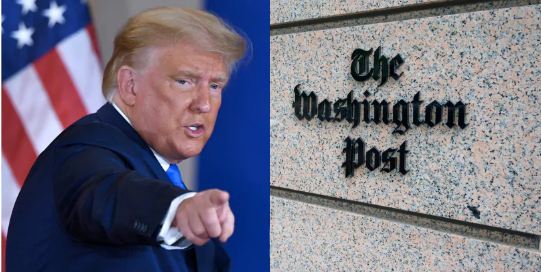 The American mainstream media, which is known to have a thing for the anarchical leftist ideology, has now been exposed as a coterie of Democrat cheerleaders who are willing to go to any extent in order to vilify the Republicans and slander their leader – former President Donald Trump. To the same effect, it has now come to light that far-left publication – Washington Post lied through its teeth two months ago, when it claimed that Trump had pressurised Georgia election officials to find votes for him so that he could win the crucial state, which he lost by just about 11,700 votes.

The recent Washington Post fiasco comes as another major media hitjob being exposed against Trump for what it is always comprised of – a bunch of lies. Now that the mainstream media has its blue-eyed old man in the Oval Office and is content seeing the reins of power once again in the hands of the radical-left lobby, the likes of Washington Post have suddenly realised that they must ‘rectify’ their mistakes, without apologising for them, of course.

On Thursday, March 11, the Washington Post updated its story from two months ago in which it had falsely claimed that Donald Trump had asked the state’s top election investigator, Frances Watson to “find the fraud” and that she could be a “national hero” if she did so.

Washington Post accused the former US President of meddling with election results and coercing investigation officials into somehow making him win the state. The false story by Washington Post was soon picked up by a whole lot of liberal media, who went berserk reporting a lie and slandering a President for no fault of his.

BREAKING: The Washington Post has retracted their story about Pres. Trump’s call with a Georgia election investigator

“Trump did not tell the investigator to ‘find the fraud’ or say she would be ‘a national hero’ if she did” pic.twitter.com/kqlMvjPM4h

Recently, however, the Wall Street Journal got hold of the six-minute conversation which took place between former President Trump and Ms Watson, who Washington Post and American mainstream media claimed was being pressurised by the White House to benefit the then President.

Nowhere in the conversation, however, did Trump ask Ms Watson to “find the fraud” and that she would be a “national hero” if she did. Essentially, the Washington Post spread fake news and has still not apologised for doing the same.

Read more: American media’s Trump problem and why they will help him win the 2024 election

The far-left publication, however, has tried to lessen the embarrassment caused to it due to the abject lack of journalistic ethics in the organisation as a whole. Washington Post has now taken to pinning the entire blame on an “anonymous source”. In a ‘correction’ added to the original story, the publication has said, “Two months after publication of this story, the Georgia secretary of state released an audio recording of President Donald Trump’s December phone call with the state’s top elections investigator. The recording revealed that The Post misquoted Trump’s comments on the call, based on information provided by a source.”

It added, “Trump did not tell the investigator to ‘find the fraud’ or say she would be ‘a national hero’ if she did so. Instead, Trump urged the investigator to scrutinize ballots in Fulton County, Ga., asserting she would find ‘dishonesty’ there. He also told her that she had ‘the most important job in the country right now’.”

Guess what was missing from the ‘correction’, though? An apology by the publication for brazenly spreading fake news.

In a statement on Monday, the former President also thanked the Post for correcting the piece—while also calling reporting about his documented efforts to influence the Georgia election results, which were accurately caught on tape, the “Georgia Witch Hunt” and a “Hoax.”

Interestingly, the fake news hit job by the Washington Post had come at a time when former President Trump was beginning to make sense to a lot of Americans with his ‘election discrepancy’ rhetoric. Two months ago, just when American patriots started realising that presidential polls were not immune to discrepancies, the Washington Post came up with a fake and manufactured story of President Trump telling an election official to ‘find the fraud’ in Georgia.

For their shamelessly fallacious misadventure, Donald Trump and his team must make it a point to sue the publication, so as to ensure that the mainstream media does not try its luck another time around with Conservative leaders.