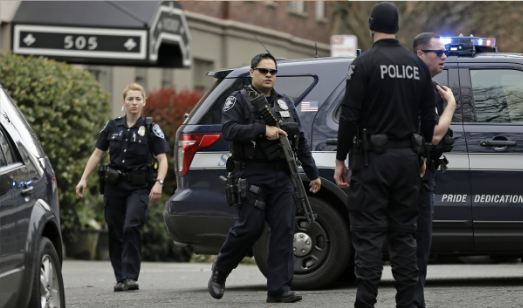 Seattle’s police department is currently experiencing a staffing crisis as a result of calls to defund the police and nightly riots that see an endless line of Antifa militants arrested and then released.

According to King 5 News, the police chief, a deputy mayor, and a downtown business group have all pleaded with the Seattle City Council to halt further cuts to the already weakened police force. Jon Scholes, Downtown Seattle Association President called the defunding of police a municipal malpractice. He said, “It’s municipal malpractice, the way that our city council has addressed public safety over these last six months.

Acting Seattle Police Chief Adrian Diaz recently stated that 911 response times are increasing, even in cases of violent crime, in a recent presentation. In just one year, the city’s police force has shrunk by nearly 200 officers.

Deputy Mayor Tiffany Washington spoke against the defund to the city council. She said, “My older brother Michael spent most of his life in prison. I remember watching him being thrown down by the police and arrested on multiple occasions. This early introduction to police caused me to grow up with a negative image of who they are and how they treat people. Black people were enslaved for over 400 years and cannot be expected to get better in a year or two as there is a lot of repair needed.”

She added, “Reducing the police budget to invest in communities this year, will not result in immediate change. When I call the police for help as a Black woman, I have an expectation that someone will come to assist me in a reasonable amount of time, this is not our current reality in the city right now.

The council is currently reviewing the police budget, with the possibility of cutting $5.4 million in 2020 police overtime hours, with the option of cutting the same amount in 2021.

Councilmember and Public Safety Chair Lisa Herbold, does not believe that officers are leaving the force due to budget cuts, despite the fact that they clearly are. She says, “Now we want to have a conversation about whether and how to adjust the budget in 2021,I think that narrative suggests that the officers that have left the department, that the reduction of the number of officers is attributable to the budget cuts. The budget cuts did not result in police officers leaving the force.”

The council is currently reviewing the police budget, with the possibility of cutting $5.4 million in 2020 police overtime hours, with the option of cutting the same amount in 2021.

Herbold mentioned the city fire department, which has seen a decrease in personnel. The downturn in both powers, according to the councilwoman, is due to the difficulties of reacting to the pandemic and the ethnic uproar that exploded following the death of George Floyd in May 2020.

Despite Herbold’s best attempts to justify the budget cuts, Scholes of the Downtown Seattle Association pointed out that many officers retired before their jobs were terminated, as part of the continuing Democrat-led campaign to defund and eradicate the police force nationwide.

Following the protests that erupted in 2020 over the death of George Floyd, Seattle council members recommended that the police force be reduced by up to 50%. Many of those council members, including Herbold, have withdrawn their support for the measure, citing an increase in violent crime, as expected by opponents of the initiative to defund and abolish the police.

A similar trend of lawlessness and followed by a bid to refund the police department have already been earlier seen in two American cities. In Minnesota, the centre of the protests following George Floyd’s death, the left-leaning Democrats’ “abolish the police” crusade forced the departure of experienced police officers and all but killed the Minneapolis Police Department’s recruiting efforts to find even a normal replacement level. The city became a crime haven and crime rates went through the roof.

There, the city council had been forced to backtrack. The Antifa-BLM protestors pushed for the defund, and the city council towing the left agenda did just that. As a consequence, the crime rates went up and normal citizens begged the city council for police officers, and life came a full circle as the police were refunded.

Moreover, in Portland, the same sequence panned out, days after the city of Portland registered its 20th homicide, Mayor Ted Wheeler announced that he would pursue $2 million in one-time funding to allow for more robust policing on city streets, as well as increased civilian oversight, in an attempt to curb an increasing wave of gun violence.

What is happening in Seattle has already occurred in the two cities mentioned above. While the two cities learned their lesson, Seattle does not seem to understand the drawbacks of a defunded police department. It will soon realize it as the police department is getting short-staffed, and criminals take over the streets. Very soon the citizens would be sleepless in Seattle.