In the name of diversity, Joe Biden is turning the US Military into a weakened and a highly compromised unit 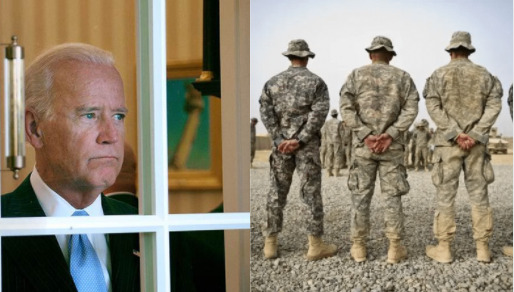 It’s been around two months of Joe Biden’s presidency of the most powerful country on the planet, and the military analysts have already had enough of his cynical decisions aimed at weakening the USA’s armed forces detrimental to America’s security interests. Speaking to Fox News last Monday, Retired Army Col. Douglas Macgregor warned how the USA’s policies to fight unending wars in the foreign lands have led to a profound negative impact on the American military while the USA’s rivals continue to jostle each other to present themselves as the biggest security and strategic threat to the United States.

With a weak Biden in the White House, the USA’s arch-rivals including Iran, China and North Korea have gotten a free pass to launch new aggression against the USA and its allies worldwide. While China has upped the ante on its South China Sea neighbours with its “open-fire” law, Iran has recently boasted its new “missile city” packed with cruise and ballistic missiles and electronic warfare equipment. However, United States seems to beat around the bush just to focus on more “important” issues like ending White Supremacy prevailing in the military forces and making the armed forces more diverse.

Read More: Under Joe Biden, active personnel as well as veterans in US military will be given grants to get their sex changed

While unilaterally assuming the role of Global Police, the US has sought to fight with the weak enemies in different war zones of the world in the past two decades. In Macgregor’s words, “While US has been fighting against Pick up teams, the rivals are training for the super bowl”. Macgregor further elaborates “We assume certain things will work because they worked in Iraq or Afghanistan. They have no chance of working at all against the Chinese, the Russians, the Turks, any number of people”.

Without mincing his words, Macgregor has called upon the Biden administration to realise the extent of the Chinese threat. On the contrary, Biden is doing everything to please the hardcore liberals at the cost of the Armed forces’ integrity and effectiveness.

According to Washington Examiner, Joe Biden signed an executive order on Jan. 25 titled “Enabling All Qualified Americans to Serve Their Country in Uniform,” which repeals an Obama-era policy prohibiting federally supported gender reassignment surgery. The military “thrives when it is composed of diverse Americans who can meet the rigorous standards for military service, and an inclusive military strengthens our national security,” according to Joe Biden’s executive order. Biden stated, “It is my conviction as Commander in Chief of the Armed Forces that gender identity should not be a bar to military service”. Adding further, “Moreover, there is substantial evidence that allowing transgender individuals to serve in the military does not have any meaningful negative impact on the Armed Forces.”

Recently, Biden has also directed Pentagon to pay for sex-change surgery for transgender troops. That will likely cost billions of dollars at a time when federal spending is already out of control adding up more pressure on the American taxpayer. Earlier, a Pentagon report also warned of threats from “White supremacists within the military”. The report warned, “Despite a low number of cases in absolute terms, individuals with extremist affiliations and military experience are a concern to U.S. national security because of their proven ability to execute high-impact events.”

Read More: Chinese generals want to boost China’s military spending as they think a conflict with the US and India is inevitable

Biden’s agenda, as displayed by his little time in office, indicates two things – reversing Trump’s policies and stamping his mark on societal norms. By doing both, he is passionately subversing the core principle of the US Armed forces to help the nation face any adversary. It’s now more than clear that Biden’s agenda is to turn the US military into a highly compromised unit rather than a powerful one, that too in the name of promoting internal diversity.

CCP threatens Hollywood to not give Oscar to ‘Do Not Split’, a documentary based on Hong Kong