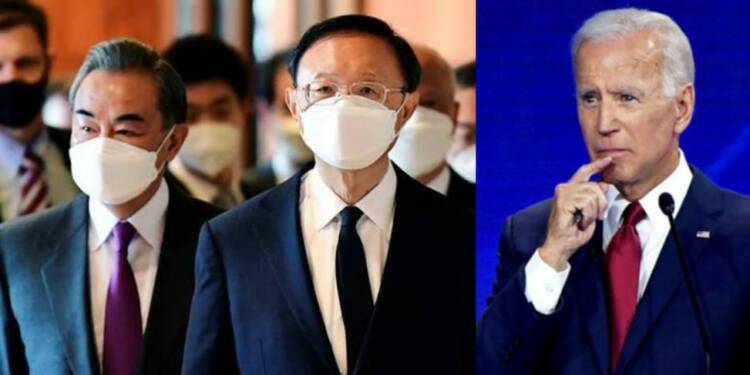 In the frosty region of Alaska, things turned quite hot to handle, as a confused Biden administration floundered around in shortage of words while a Chinese delegation thrashed the living daylights out of it. TFI had only a day ago explained how Joe Biden was walking into a landmine by holding talks with China. As it now turns out, the landmine has exploded right in the current president’s face. What was witnessed during the ‘Alaska Dialogues’ between the U.S. and China was a disaster for the Biden administration, which could have very well been averted. However, Joe Biden stood there, with a red cloth in his hand, willingly being run over by a raging bull in the form of China.

Clips from the talks between the two sides have now flooded social media, and the U.S. can be seen being thrashed left, right and centre by Chinese representatives Yang Jiechi and Wang Yi. A meek U.S. delegation watched on, as the Communists charge at them with unusually long monologues. What’s worse, the Biden administration seems to have taken to responding to Chinese aggression after the talks are done and dusted! Unlike former President Trump, whose very body language and rhetoric was sufficient to scare China off, and who was personified in his administration’s representation of the U.S., Joe Biden has naturally been perceived as a weak and feeble head of state with an equally meek administration.

Read more: Alaska Dialogue between US and China: The Biden Administration is walking straight into a land mine planted by Trump

Make no mistake, the first tranche of talks between U.S. and China have proven to be a disaster for the former, which not until very long ago had the paper dragon by the throat. This time around, however, China grabbed the Biden administration by its collar and blasted them during their representatives’ unending monologues. To be fair, Secretary of State Antony Blinken did try to up the ante against his Chinese counterparts – however, he was too polite, soft-worded and lenient in doing so. The absence of strong and stinging words when speaking about issues like Taiwan, Hong Kong, Xinjiang and the Indo-Pacific at large served as a cue for the Chinese to thrash their American counterparts.

When national security adviser Jake Sullivan tried to corner China for undertaking an “assault on basic freedoms”, but diluted the same with a rider like, “We do not seek conflict but we welcome stiff competition,” the Chinese realised that they were up against a defeatist Biden administration. So, Yang responded angrily by demanding that the U.S. stop pushing its own version of democracy at a time when it is itself roiled by domestic discontent. He also accused the U.S. of failing to deal with its own human rights problems and took issue with what he said was “condescension” from Blinken, Sullivan and other U.S. officials.

Yang Jiechen ‘scolded’ the United States, in turn, for its own dismal state of democracy, saying, “We believe that it is important for the United States to change its own image and to stop advancing its own democracy in the rest of the world…Many people within the United States actually have little confidence in the democracy of the United States.” He added, “There is no way to strangle China.” Caught by surprise with the unprecedented aggression being mounted by China, U.S. representatives, particularly Antony Blinken, were seen going hysterical with their body language, as they simply could not contain their inherent fear of China.

The U.S. and China leveled sharp rebukes of each others’ policies in the first high-level, in-person talks of the Biden administration, with deeply strained relations of the two global rivals on rare public display in Alaska https://t.co/cl3SoVXQmE pic.twitter.com/JAJxufB674

The Chinese side categorically stated that their country will not be handled by the U.S. from a position of strength, even as he took a sarcastic jibe at America, saying, “We do not believe in invading, through the use of force or to topple other regimes…or to massacre the people of other countries.” Essentially, the American side made a fool of itself in front of the Chinese, by appearing to be following Trump’s anti-China activism in letter, but not having the dedication to follow through it in spirit. That is all China needed to obliterate the Biden administration, as it visibly did.

Would it have been imaginable that under Donald Trump, China would, in the words of the State Department itself, dare “to have arrived intent on grandstanding, focused on public theatrics and dramatics over substance?” Absolutely not, because Trump would simply not take any of China’s fake and unwarranted virtue signalling. Yet, Biden did, and the same will now have global repercussions. America’s allies and friends have got the message – America is not back, instead, it is being scolded around by China.

Nations which have been fence-sitters all this while when it comes to China will now be convinced to not outrage the paper dragon, for if it can blast the United States of America, what would it possibly do to smaller countries in the ASEAN and Indo Pacific? Even among America’s allies, the proposition of talking to China and registering their place in its good books will now be stronger than ever, because rest assured, the U.S. is simply incapable of protecting their interests for the next four years at least.

Joe Biden most definitely had a choice. He could have worked upon the foundations of anti-China activism laid out by Donald Trump. Instead, he chose to prostrate before the paper dragon, which is now burning the United States with fire from its mouth. Joe Biden has fallen into a trap. Here on, if he continues going soft on China, despite being publicly thrashed by it, it will effectively be an admission that he is a compromised president. And if he chooses to take on China; well, the standards of Donald Trump are simply too high to accomplish. Mind you, Biden would have to do even more than what Trump did to China in order to tame it, as anything less would simply be dismissed by the CCP as inconsequential.