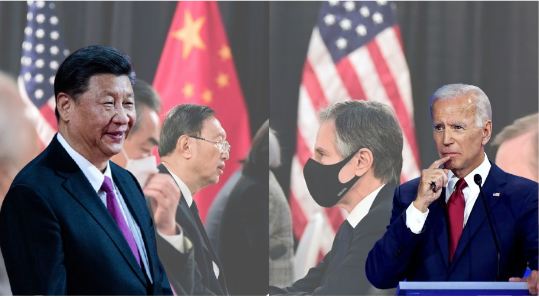 Baizuo (白左) is a Chinese slang, which literally stands for “The White Left”. It is not an adulatory adjective, rather one of the most popular derogatory slurs that Chinese netizens use to take their opponents down in online duels. The definition of Baizuo is those who only care about topics such as immigration, minorities, LGBT and the environment and have no sense of real problems in the real world, are hypocritical humanitarians who advocate for peace and equality only to satisfy their own feeling of moral superiority, they are obsessed with political correctness to the extent that they tolerate backwards Islamic values for the sake of multiculturalism, they believe in the welfare state that benefits only the idle and the free riders, they are the ignorant and arrogant westerners who pity the rest of the world and think they are saviors.

Quite a slang, one must say. Ever since clips from the 2+2 dialogue between the US and China flooded the Chinese social media, the term Baizuo was back in vogue. The abject and meek surrender of the USA’s National Security Advisor Jake Sullivan and Secretary of State Antony Blinken before Chinese representatives Yang Jiechi and Wang Yi was the reason behind it. Joe Biden is officially a Baizuo for China now. It is funny how quickly things change in global affairs. It seems like yesterday when Wang Yi visited Japan. Japan under the leadership of the newly appointed Prime Minister Yoshihide Suga had grilled the Chinese Foreign Minister on the issue of China’s illicit claims on the Japanese Senkaku Islands. What’s funnier was that Wang Yi was hoping for a respite in Japan. He had recently come back from a disastrous Euro tour.

When Wang Yi had visited European countries in September last year, he was welcomed with the choicest abuses and disrespect at a scale that China was not used to. In Germany, the German Foreign Minister Heiko Maas warned China of dire economic and policy consequences unless it realized its limits. Before this, the speaker of the Czech Republic’s parliament had visited Taiwan with an entire entourage. Things were so bad for China, that Wang Yi held a press conference. He looked utterly defeated and unusually modest, he went on to declare that there were no wolf warriors in China and that China was a target of bullying and vilification by the US and other Western powers.

So how did meek, dejected, and subdued China suddenly become Wolf Warriors? Because Biden allowed them to do so. Back when Trump was in power there was a clear rule – no talks with China until they mend their ways. Trump took it upon himself to hit at China’s unfair trade practices. His trade war with China brought the paper dragon to its knees. Trump’s Quad activism against China made the middle kingdom rethink its options. And Trump’s direct attack on China for the propagation of Coronavirus made China an object of global derision. And it showed in the approach of various countries towards China as well. With the US on its side, India went on to inflict massive casualties on China in the battlefield while banning hundreds of its apps all the same. Every act of aggression from China was responded to, in kind by Japan and Australia. With Vietnam leading them, most ASEAN nations turned against China and even smaller nations like Maldives and Sri Lanka broke free from Chinese debt traps.

With Biden in power, all of that has of course changed. One of the very first executive orders that Biden signed as the president was removing the Chinese Virus tag from the coronavirus. He did that to disavow racism and xenophobia toward Asian Americans, specifically targeting anti-Asian animus connected to the COVID-19 pandemic. He, then, went on to call the Chinese President Xi Jinping bright and tough. The Biden administration did not stop there. At the end of the 2+2 security talk with South Korea, Secretary of State Antony Blinken urged China to convince North Korea to denuclearize. This effectively meant giving the keys of North Korea to China.

Chinese diplomats excel at creating a façade of strength. Most of the times their threats are hollow and are seldom followed by action. But Chinese smell weakness from a mile and the thrashing that Sullivan and Blinken received was a result of Biden’s perceived weakness when it comes to dealing with Beijing. The same Wang Yi was stuttering and stammering in Europe, in Japan and in much of the rest of the world, now he and his colleague wiped the floor with American diplomats and walked out nonchalantly. Baizuo is probably the correct word to define Biden and his team because all team Biden seems to be concerned about are immigration, minorities, LGBT and the environment and they definitely have no sense of real problems in the real world.