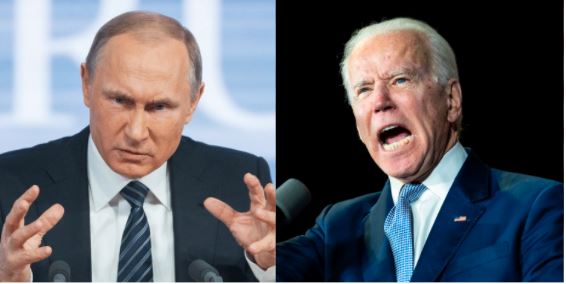 US President Joe Biden was challenged for a live, one-on-one debate by his Russian counterpart – Vladimir Putin. Being the courageous, unflinching and strong President that he is, Biden emphatically refused Putin’s rather courteous challenge. In response to the challenge of a live debate thrown by the Russian President, Biden retired into a corner and instead deputed his press secretary – Jen Psaki to deal with the aftermath of his outrageous and undiplomatic remark, where he called Putin a ‘killer’. Psaki informed reporters at the White House that Biden had refused Putin’s said challenge, and that he was too busy to engage in a debate with the Russian President.

However, Joe Biden refusing Putin’s challenge for a one-on-one, no holds barred debate does not mean that the US President can have it easy here on. In fact, Putin has a rather extravagant game up his sleeve. First, he subtly referred to Biden as ‘senile,’ wishing him good health – which he evidently needs. He also said that whatever Joe accused Putin of being, the 46th President himself was. After brutally taking down Biden with his words, Putin also took to humiliating him with actions.

Russia earlier recalled its ambassador to the US, as a mark of protest for Biden’s outrageous remarks. In a recent development, Moscow refused to send its top UN representative to talks with US President Joe Biden on Thursday, electing instead to dispatch a junior envoy. RT reported that President Biden had invited permanent representatives from the United Nations Security Council, on which Moscow has continuous representation, to discuss his country’s “commitment to values-based global leadership.”

However, Dmitry Polyanskiy, second-in-command to Russia’s permanent representative – Vassily Nebenzia, confirmed on Friday that neither had attended the meeting with Biden. Instead, he revealed, Anna Evstigneeva, one of three more junior deputies, had joined the talks with the US President in their place and had made no remarks on behalf of Russia. Evidently, a cold-war like situation seems to be developing between Moscow and Washington DC.

This time around, however, President Biden has nobody but himself to blame for the steep downfall in bilateral ties between the United States and Russia. Instead of focusing on China, which threatens global peace and stability, the Biden administration has instead focused all its energies on ‘taming’ Russia. In the process, it has accepted being scolded around by Chinese Communist Party officials; not to mention, being ignored by North Korea.

One would have thought that President Biden would realise the geopolitical repercussions of his rant against Russia and its President, however, the White House press secretary continued with the fake show of bravado, and said that the President did not regret his earlier remarks. She added, “We are confident that we can continue to look for ways where there’s a mutual interest…​But the president is not going to hold back, clearly, when he has concerns, whether it is with words or actions.”

The way things are unfolding, Moscow will not take Biden’s ‘killer’ remarks lying down and will continue upping the ante against the Biden administration. If the US does not mend its ways and have its President mind his language, the world’s most powerful nation is heading down a path of self-destruction.