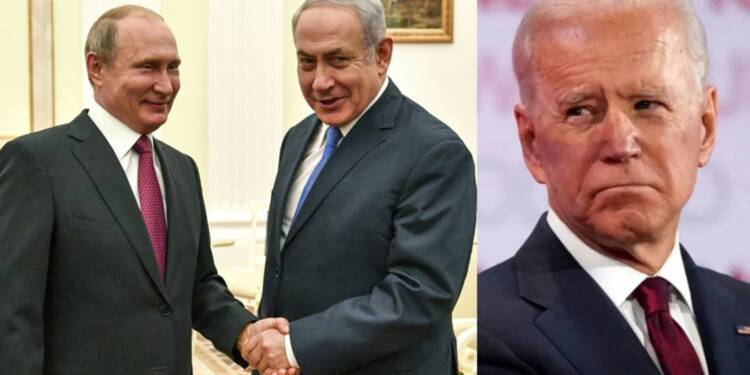 As US President Joe Biden stirs up a controversy stating that he does think that Russian President Vladimir Putin is a ‘killer’ taking relations with Moscow to an unprecedented low, Israel, miffed with Biden’s Middle East policy, has hinted that it has no qualms against stepping up its ties with Russia and supporting Moscow’s role in the Middle East.

Israel has made no secret of the fact that it is dead-opposed to the idea of the U.S. leading a global effort to resuscitate the Joint Comprehensive Plan or Action (JCPOA), or what is commonly referred to as the Iran Nuclear Deal. Joe Biden, who happens to be the U.S. President, has made it a priority to re-enter the nuclear deal, in order to eternalise the disastrous foreign policy legacy of his godfather – Barack Obama. Now, Israel, seeing that the U.S. has left it high and dry, has begun cosying up to Russia, and Joe Biden has nobody but himself to blame for the setback the U.S. is about to receive in the Middle East.

It is a widely established fact that the way into the Middle East runs through the heart of Israel. Whoever earns the trust and friendship of Israel can play a dominating role in the region. For the past four years, under the Trump administration at the helm of affairs in the U.S., Russia could not play a dominating role in the region. Now, however, Joe Biden is offering such an opportunity to Moscow on a silver platter.

Israeli Prime Minister Benjamin Netanyahu is no fan of President Joe Biden – for the latter’s obvious pro-Iran inclinations, which threaten the security of Israel. So, in a move that will upset the Biden administration, the foreign minister of Israel Gabi Ashkenazi met his counterpart, Sergei Lavrov on Moscow Wednesday, and heaped praises on the strong ties between their nations.

A statement by the Israeli Foreign Ministry quotes Ashkenazi telling Lavrov that Jerusalem “appreciates the stance of Russian President Vladimir Putin and the Russian Federation, which support Israel, and for their repeated commitment to Israel’s security.” Hailing Russia as an “important and central player in the Middle East that is important to regional stability,” Ashkenazi says he views as important the “continued and fruitful dialogue” between the countries “which is based on common interests and cooperation on matters of national security.”

The meeting between the foreign minister of Israel and Russia comes days after the senior U.S. and Israeli officials held the first session of a bilateral strategic group aimed at collaborating in the effort to prevent Iran from obtaining a nuclear weapon. “During the discussion, the two sides shared perspectives on regional security issues of mutual interest and concern, including Iran, and expressed their common determination to confront the challenges and threats facing the region,” a statement by the White House said. “The National Security Advisors agreed on the importance of strategic interagency consultations and pledged to continue these engagements,” it added.

The ‘strategic interagency consultations’ referred to in the statement, simply put, is the exchange of high-level intel between Israel and the United States relating to Iran in general, and the Middle East at large. This intel, which is mostly shared by Israel with the U.S. is what helps the world’s oldest democracy retain its dominating position in the Middle East. Rest assured, in absence of Israel’s intel sharing, the U.S. would be reduced to a paralysed force in the region. Now, however, by cosying up to Russia, Israel might be signalling its intent of sharing the said intel with Moscow instead of Washington D.C.

This will propel Moscow to overtake the U.S. in the Middle East. In such a scenario, Joe Biden will have nobody but himself to blame. At the core of such a prospective disaster for American will be the Biden administration’s ego, and its continued snubbing of Israel while negation of its security apprehensions. Adding to Israel’s determination of promoting Russia as a major player in the Middle East is also the Biden administration’s purported decision to push for a two-state solution between Israel and Palestine. A memo titled “The US Palestinian Reset and the Path Forward,” which was revealed Wednesday to the Abu Dhabi-based The National, also showed that the Biden administration is planning on announcing a $15 million aid package in coronavirus-related humanitarian assistance for the Palestinians as early as this month.

The Times of Israel reported that in the memo, the White House backs a two-state framework “based on the 1967 lines with mutually agreed land swaps and agreements on security and refugees.” Needless to say, for Netanyahu, such a ‘solution’ is a no-starter. Already, Israel has plans of annexing the West Bank, and it definitely does not need a “two-state solution” of Joe Biden to address its conflict with Palestine.

There is nothing much which remains in relations between the U.S. and Israel. Netanyahu has realised the same, which is why it is turning to Russia as an alternative. In the process, it might even be leveraging its stature as an intel-rich nation to give Biden one last chance to make amends.