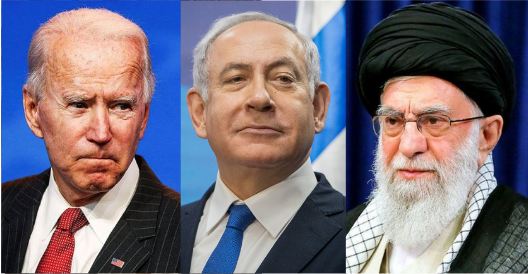 The Biden administration has begun realising that it played its cards out too early when it comes to the aimed resuscitation of the Iran Nuclear Deal, also called the Joint Comprehensive Plan of Action. Iran, sensing that President Biden and his administration are even more desperate than the Shi’ite leadership in Tehran to have the nuclear deal revived, began aiming big, and made it known that a complete rollback of all stringent sanctions will be a prerequisite to the country participating in talks with the United States. That far, Biden too is not willing to go. Back in Israel, meanwhile, Netanyahu has learnt many lessons. The Israeli Prime Minister has learnt how to deal with Biden. He knows what works on the man and how Biden works himself.

Slowly, nuclear deal talks with Iran are beginning to revert back to the deep freezer, and any chances of the JCPOA being revived are fizzling out by the day. Israel – the arch-nemesis of Iran, has been warning the free world order, especially the United States, that no lengths will go unexplored when it comes to the Jewish nation defending its interests if the nuclear deal with Iran is brought back to life. The fact that the talks for JCPOA revival are now beginning to look like a no-starter itself is good news for Tel Aviv, but Israel has learnt just too many lessons this time around.

So, the West Bank annexation by Israel is just around the corner, and no amount of international pressure, particularly from the US can stop Tel Aviv from achieving it.

Israel has seen first hand how a change in guard at the White House jeopardised the country’s security situation, and how it will have to make itself stronger in the remaining years of Joe Biden in office. Prime Minister Benjamin Netanyahu had the Israeli forces armed and loaded last July for the same, but decided against it under international pressure, and the Trump administration’s promise on ensuring that the Jewish nation gets recognised by Arab nations across the Middle East, leading to it having normalised relations with such countries.

But now, the realities are far too different for Israel and it must send a signal of strength resoundingly across the world. Already, it has made it known to the US that Biden’s desperation to enter the deal will have severe consequences, not just for Iran, which would be targeted militarily by the Jewish nation, but also for America, which would lose an unparalleled ally in the Middle East. Domestically, the Iran nuclear deal has been turned into an election issue by Netanyahu.

In terms of diplomacy and sending the right international signals too, Israel has always been many steps ahead of the Biden administration. For instance, talks of the US swooning over Iran to bring it to the negotiating table for the nuclear deal led to another set of chatter in the Middle East – that of Israel, United Arab Emirates, Saudi Arabia and Bahrain forming a military coalition, without America, primarily to take on Iran and its nuclear ambitions. This sent shivers down Joe Biden’s spine.

In the past week or so, a lot has happened. The US bombed Iranian proxies in Syria – marking President Biden’s first bombing of a country while in office. Then, he also ordered for the B-52 bombers to be sent to the Persian Gulf. The White House also took to extending sanctions on Iran, a sweeping reversal in the present administration’s earlier handling on the Shi’ite nation, when it was not tiring out by extending olive branches to Tehran.

The hopes of the Iran nuclear deal being rekindled, or even formal talks to that end being initiated, seems much more distant now than it did a month ago.

Make no mistake, the Biden administration gave in to Israel’s pressure, which simply drew the line for the US – that the time of choosing between Tel Aviv and Tehran had come. Evidently, America has chosen the former, while continuing the exertion of Trump’s ‘maximum pressure policy’ on the latter.

Now, Israel is dictating the Biden administration on its handling of Iran, after rejecting Joe Biden’s plan to do the Iran nuclear deal. Israel will not, at any cost allow Iran to acquire the nuclear bomb, plain and simple. And now, Biden has relented. So, it seems that Prime Minister Netanyahu has won.

Israel and its political leadership have tasted blood. Netanyahu has learnt the art of dealing, and prevailing over Joe Biden, who unfortunately happens to be his American counterpart. Meanwhile, Israel is beginning to find good friends in the Arabs, who are willing to go to any lengths themselves for ensuring that Iran does not see its nuclear ambitions fructifying.

Domestically, Netanyahu is becoming stronger. His political strength and clout are growing within Israel. He is being seen as a leader who took on the United States and forced it to relent. The Israeli Prime Minister also knows what works on Biden – pressure and muscle-flexing.

So, we now come back to the crux of the matter. The geopolitical and domestic conditions are suddenly in Israel and Netanyahu’s favour. Israel can, as such, seamlessly go ahead with its plans of annexing the West Bank, which was put under hold due to the Abraham Accords being worked out last year. Now, however, the accords are a done deal. They will not be rescinded now, as the friendship between Israel and the Arabs is growing stronger by the day.

The only loser here is the Biden-led US, which has lost the moral high ground in dealing with Israel. Now, Tel Aviv simply does not care and can go ahead with what needs to be done without fearing an international backlash. The United States has lost the authority of telling Israel what is to be done. More than annexing the West Bank because Israel has a right to, Netanyahu will go ahead with the same because he wants to send a resounding message not just in the Middle East, but across the world – that acting against the Jewish nation will have severe consequences.