Biden played his cards too early and rather too recklessly and now Japan, India and Israel know exactly how to handle him 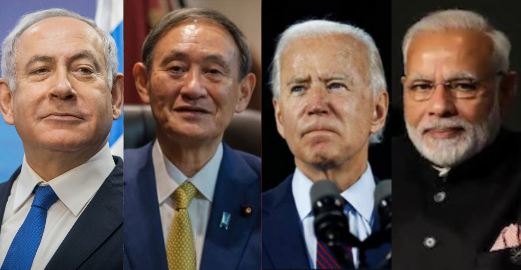 US President Joe Biden started his tenure in January with a lot of vigour. He wanted to do a lot of things, which includes befriending Iran and China. In fact, Biden charged in like a raging bull on issues like reviving the Iran nuclear deal and letting China go scot-free over the Uyghur genocide. But he has been tamed by India, Japan and Israel in just over a month.

In the Middle East, for instance, Biden showed how he was desperate to revive the Joint Comprehensive Plan of Action (JCPOA), or the nuclear deal. Tehran itself noticed Biden’s desperation for rejoining the JCPOA. Therefore, Iranian leadership started aiming big. The Shi’ite nation wanted unconditional revocation of American sanctions.

In appeasing Iran, Biden was constantly charging in like a raging bull against two US allies in the Middle East- Israel and Saudi Arabia. But it didn’t work.

Israel’s Prime Minister Benjamin Netanyahu knew exactly how to deal with Biden. He made an election issue out of Biden’s desperation to rejoin the JCPOA and also started to warn of dramatic consequences as well as heightened military preparation against the Shi’ite nation. This was a signal of how things could escalate, in case Biden went ahead with his plans.

In the Middle East, Biden stands compelled to continue from where Trump left. So, the “maximum pressure policy” is back again, as the US President has started showing military muscle against the Shi’ite nation all over again. An unwilling Biden has also continued Trump’s sanctions against Iran.

A foreign policy reset is also happening in the Indo-Pacific. Again, we have the same story. India and Japan came close to Trump, which made Quad – an informal strategic forum comprising of Japan, India, Australia and the US – an overwhelming force in the region.

Yet, Biden had his own issues. He wanted to turn back the clock and return to the pre-Trump days when Biden’s former boss Obama was bringing the US and China extremely close. Regardless of the new global realities, he wasn’t ready to call China an enemy, rather he wanted to treat the Communist nation as nothing more than a “serious competitor“.

So, in his first one month of power, Biden did many things for China and came charging in like a raging bull against India and Japan. Firstly, Biden tried to do two things- undermine the Quad and dilute the vision of a Free and Open Indo Pacific (FOIP). Both these formats were inherently anti-China and so there was a clear pro-China bent in Biden’s administration.

Later, Biden started going berserk. He tried to downplay the issue of Uyghur concentration camps located in China-occupied Xinjiang. To make it worse, Biden was also ready to abandon Japan as China stepped up aggression in the East China Sea with the object of taking over the Senkaku Islands.

Yet, India and Japan have tamed the raging bull in Biden. The fact remains that New Delhi and Tokyo are still the frontline US allies in the region and Biden couldn’t have simply ignored them.

The signal from India and Japan was clear- China is the biggest threat and that centrality of the Indo-Pacific has to be upheld. Soon, he realised that Japan and India are too strong to be bullied and it is Biden who had to make a foreign policy reset.

Now, the US President is making amends. He is planning to host Japanese Prime Minister Yoshihide Suga at the White House in April. A first-ever meeting of the Quad head of States is also in the reckoning. Australia’s Prime Minister Scott Morrison said,  “This is one of the first things President Biden and I discussed when we spoke some weeks ago. And I spoke to Vice-President Kamala Harris just this past week.”

As for India, US Secretary of Defence Lloyd Austin is expected to visit this month. This shows how even Biden cannot afford to ignore Indo-US ties in the defence sector.

There is a clear course correction in Biden’s Indo-Pacific policy. We can see a pro-Quad/ Indo-Pacific pivot taking place in the US administration and it directly militates against Beijing’s aspirations.

The raging bull in Biden thus stands tamed. He played his cards too early, and American allies know exactly how to handle him.