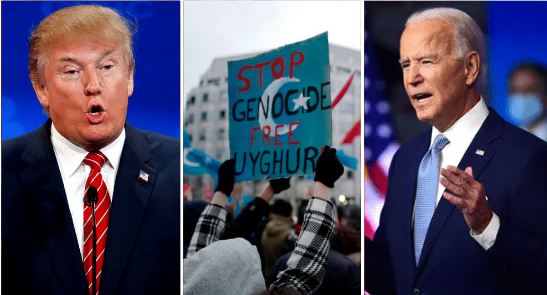 Joe Biden has lowered the bar of American foreign policy to such an extent that no other president even comes close to committing such blunders in such a short span. While the Biden administration was busy at explaining US allies regarding its commitment towards the safety and security of Indo-Pacific, Joe Biden went ahead and showered praises on Xi Jinping as well as justified the Uyghur genocide by terming it a cultural difference. Now more than ever, world is not ready to support this duplicity.

The world had found a leader in Donald Trump, who was both outspoken and decisive. It was Donald Trump, who had set the precedent by terming the Chinese atrocities in Xinjiang as genocide. Now, as Joe Biden is laying the ground work to remove the genocide tag from Chinese Communist Party, the world has paid no heed. Countries around the world are sticking to the policies of Donald Trump vis a vis China.

Many countries, ignoring the attempted defense of Xi Jinping by Joe Biden, have started to launch an offensive against China independently. Britain’s foreign secretary Dominic Raab on Monday (Feb 22) denounced torture, forced labour and sterilisations that he said were taking place against Muslim Uyghurs on an “industrial scale” in China’s Xinjiang region. The British foreign secretary instead of using the term genocide, used the definition of genocide.

Canada has also heightened its diplomatic offensive on the Chinese Communist Party. Canadian lawmakers have overwhelmingly approved a non-binding motion accusing China of committing genocide against its Muslim minorities in the western region of Xinjiang. The motion, which recognizes “that a genocide is currently being carried out by the People’s Republic of China against Uyghurs and other Turkic Muslims,” also calls on the International Olympic Committee to move the 2022 Winter Olympic Games from Beijing.

We cannot remain silent. Silence only helps those who commit crimes against humanity, never the victims. Today we're calling on the Trudeau government to recognize the Uyghur genocide. My statement: pic.twitter.com/0z2jbHXu58

Earlier, Belgium too had seen similar development. Lawmakers in Belgium’s Chamber of Representatives have submitted a resolution calling on their government to designate abuses in northwest China’s Xinjiang Uyghur Autonomous Region (XUAR) as genocide. Samuel Cogolati and Wouter de Vriendt, both members of the Ecolo-Groen grouping, put forth the proposal based on mounting evidence of China’s policies of mass sterilization and forced abortions that they called part of “a coercive birth repression campaign,” as well as the transfer of large numbers of children whose parents are detained in the region’s internment camps into state orphanages.

These developments came about a month after the previous US administration had set the precedent. The US had officially determined that China is committing genocide and crimes against Uyghur Muslims. “This genocide is ongoing, and…we are witnessing the systematic attempt to destroy Uyghurs by the Chinese party-state,” US Secretary of State Mike Pompeo said in a statement, on the last full day of the Trump administration.

Read more: Trump has closed all doors of a US-China partnership with his “Uyghur” move right on his last day.

Although these are some of the most overt actions by countries world over against the CCP’s handling of the human rights situation, countries like Japan, Australia and India have taken another approach.They have pursued a policy of making China bleed economically, as the governments in Australia and Japan have directed their companies to stop business with entities having connections to or activities in the Xinjiang region.

All in all, while Joe Biden is busy in kowtowing to the Chinese Communist Party and for some reason appeasing Xi Jinping, countries world over have lost any hope in him. The international community is going in the direction that the previous US President Donald Trump had mapped.