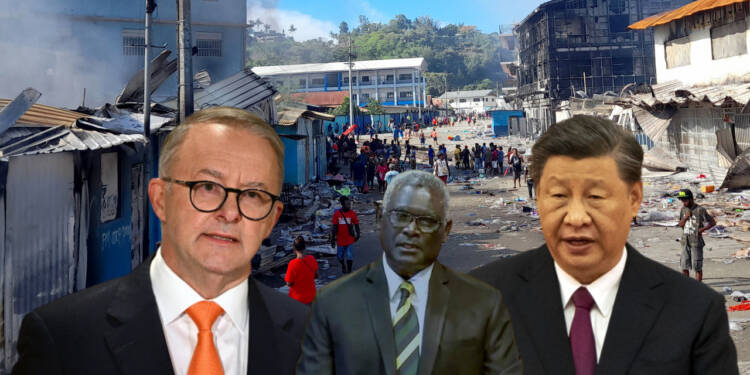 The tiny island of Solomon in the Indo-Pacific keeps making news every once in a while. The major reasons for this are its vital location and the security pact it signed with China. Leaders of several countries have flocked the island often since then. They don’t want any Indo-Pacific country siding with one and completely blocking other views.

China, meanwhile, is leaving no stone unturned to make the Solomon Islands a client state, for once and forever. This time, the point of concern is the national elections.

The elections, which were supposed to be held in the mid of 2023, have now been postponed. The Solomon Islands’ government have decided to postpone its national elections and hold them after the Pacific Games in November 2023. This was done by passing a controversial legislation that was proposed by the country’s Prime Minister, Manasseh Sogavare.

The legislation passed with 37 votes for, nine against and three MPs absent during the voting.

As a result of this most recent development, the 11th parliament will now conclude on December 31, 2023, and elections will take place in late April 2024.

The government’s unpersuasive justification was that it would be excessively expensive to pay for both the Games and the election in the same year.

Then, came the twist

The whole scenario saw a major twist when Australia Foreign Minister Penny Wong made an offer: ‘We, old friends of empire, are happy to bankroll your election.’

The statement saw a dramatic response from the Solomon Islands leadership as it claimed this to be “an assault on their parliamentary democracy and a direct foreign interference into their domestic affairs.”

However, Honiara’s opposition MPs saw the positives in the offer presented by Wong’s comments. According to MP Peter Kenilorea Jr. of the Parliamentary Foreign Relations Committee, the offer was “generous” rather than “interference”, and the fuming on Sogavare’s part is “unfortunate and extremely unhelpful.

Matthew Wale, the head of the opposition, likewise believes that Sogavare is trying to consolidate his position and is using the amendment measure as a diversion. It has exposed Sogavare and his government’s selfish aim to hang on to power.

“If we respect the people’s mandate and parliamentary democracy and processes, MPs should reject the Bill to postpone elections.  With Australian funding, there is now no need for the bill.” Wale said.

Why does China want to postpone elections?

China wants to postpone elections so that the regime of Sogavare can help Beijing strengthen its position in Indo-Pacific. Manasseh Sogavare is a China-dove and his rule in the last three years has proven it. He has developed an immense puppy crush on China.

If one remembers correctly, Beijing established diplomatic relations with the Solomon Islands back in 2019. However, the Chinese rising influence came out in the open when the news spread that the nations have reached a secret security agreement.

Read More: The people in the Solomon Islands have decided to throw China and its poodle PM out of power

Australia’s opposition’s foreign affairs spokesperson said that the said security pact was ‘the worst foreign policy blunder in the Pacific that Australia has seen since the end of World War II’.

It’s even been reported that China has opened a naval base in the Solomon Islands. The move has aggrieved the people of the islands.

Soon, the opaque partnership between Beijing and Honaira started to show its effects when the Solomon Islands denied docking permission for two international warships, enforcing its territorial rights.

Reportedly, the British patrol boat HMS Spey and the US Coast Guard Cutter Oliver Henry were forced to divert to other ports after taking part in a 15-nation, 10-day mission to deter illegal fishing in the region. At that time, Sogavare lambasted naval ships, citing that they failed to provide the required paperwork.

However, the world was pretty sure that action was taken on China’s diktats. Several countries across the world, notably Australia and the United States, are worried that Sogavare is now ostensibly sitting in Xi Jinping’s lap. With their leader dancing to Beijing’s tunes, the people of Solomon Islands must be much more concerned than the world.

Moreover, the illegal partnership between the nations isn’t recognized by the people. For anti-China elements in the Solomon Islands, it has become clear that Beijing is out to colonise them, loot their country and interfere with their internal affairs.

Several violent incidents against China in the recent past suggest that the islanders won’t let China stay in their country forever and will do anything to push the dragon out.

Anti-China activists in the Solomon Islands are therefore creating a hostile atmosphere for Beijing. They are making it clear to the Chinese nationals that a heavy cost will have to be paid for their malicious activities in the archipelago nation. This is a warning of sorts for the Chinese- ‘leave the Solomon Islands for your own good.’

The Solomon Islands even had to seek Australia’s help in handling the protests. The current atmosphere suggests that, even if the Sogaware postpones elections, anti-establishment protests will break out on the island. One thing can be concluded for sure from these happenings that, Sogaware has to go soon.