There were heavy clashes and protests in Malaita last year after Sogavare expressed his support for the ‘one china policy.’ 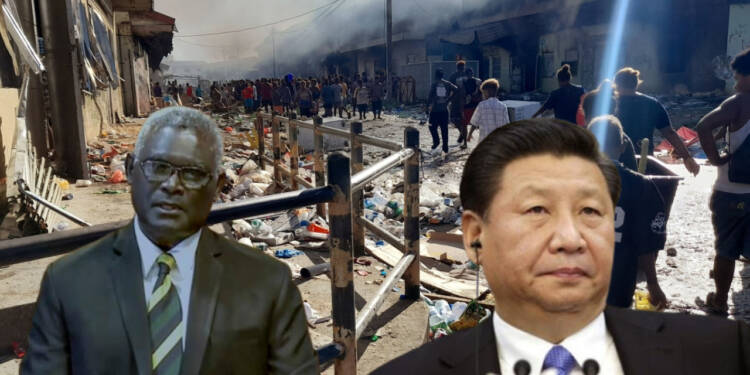 The Solomon Islands, a newly turned client-state of China, is now officially sitting on a powder keg. According to the Guardian, the government of PM Manasseh Sogavare has submitted a proposal in parliament irking to delay elections.

According to reports, PM Sogavare’s administration has expressed its desire to extend the Parliament till the end of the Pacific Games, in November 2023. It should be noted here that Beijing has provided funding for seven stadiums and venues for the games.

Sogavare’s office states that the Solomon Islands cannot afford to hold both significant events in the same year. The opposition is immensely angered by this approach of Sogavare. Although his approach is not illegal at all, using Pacific games as an excuse shows that there is a worm in the apple.

See, national elections are held every four years in Soloman Islands, and the Solomon parliament is due to be dissolved in May 2023. Using this draft, Sogavare’s eyes stay in power for six more months. However, there is something under the cloud.

Ruth Liloqula, the chief executive of Transparency Solomon Islands stresses that Sogavare intends to drop a “bombshell” on the people of Solomon Islands.

“This is something that they do not want to see happen,” said Liloqula. She furthermore stresses, “The provision that they’re using in the constitution is not meant for a games event. It is meant for a matter of life and death and for unforeseen crises beyond our control.”

To be honest, Sogavare trying to stay in power, till the pacific games, is indeed a childish excuse. However, keeping in mind the anti-China stance of his people, there is a stark possibility that Sogavare fears the outcome of growing Chinese influence.

Manasseh Sogavare has developed an immense puppy crush on China. If one remembers correctly, Beijing established diplomatic relations with the Solomon Islands back in 2019. However, the Chinese rising influence came out in the open when the news spread that the nations have reached a secret security agreement.

Reportedly, the British patrol boat HMS Spey and the US Coast Guard Cutter Oliver Henry were forced to divert to other ports after taking part in a 15-nation, 10-day mission to deter illegal fishing in the region. At that time, Sogavare lambasted naval ships citing that they failed to provide the required paperwork.

However, the world was pretty sure that action was taken on the China’s diktats. Several countries across the world, notably Australia and the United States, are worried that Sogavare is now ostensibly sitting in Xi Jinping’s lap. With their leader dancing to Beijing’s tunes, the people of Solomon Islands must be much more concerned than the world.

Read More: Australia could finally break its silence by dampening China’s dream in the Solomon Islands

Malaita, one of the most populous provinces, which has continuously supported Taiwan against China, must be rattled by the current state of events.

Sogavare is well aware of the pro-Taiwan sentiment among Malaita citizens. Malaita citizens were at the helm against Sogavare’s administration in 2021. There were heavy clashes and protests in Malaita last year after Sogavare expressed his support for the ‘one china policy.’

Previously, when Honiara had officially broken its ties with Taipei and recognized Beijing as one of its official partners. After which, the Chinatown area within the capital was completely demolished by the protests. The situation was so ablaze that Australia had to send 100 police and soldiers, and 50 peacekeepers through Papua New Guinea.

Even the citizens of the Solomon Islands are no great fan of Sogavare. His recent actions have been accompanied by popular riots and controversies, which have definitely tarnished his popularity.

It looks like the people of the Solomon Islands are extremely fed up with their PM. Either they have decided to throw China and its poodle PM out of power or to simply ditch away from the Solomon Islands. This resistance of the people might be a reason why Manasseh Sogavare intends to stay in power for a little more time to make Solomon a complete ‘Chinese state’.

A black journalist refused to vilify White Canadians, got fired