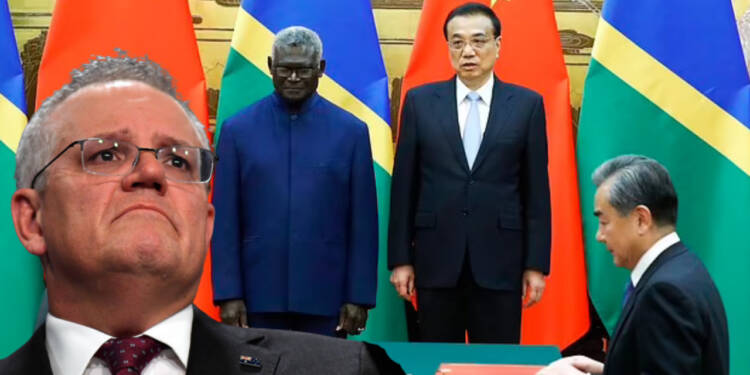 China and the Solomon Islands have just inked a security pact that has given rise to major concerns in the Indo-Pacific, precisely, the South Pacific region. Several nations in the region are concerned as the leaked draft of the deal contains many ambiguous phrases that could lead to China establishing a naval base on the islands eventually. Where would that leave Australia? China has steadily been snatching the Solomon Islands from Australia, and the security pact between Beijing and Honiara came as a severe blow to Australia’s interests and security in the region.

The Pacific Games and how Australia Fits In

It is no secret that Solomon Islands’ Prime Minister, Manasseh Sogavare is a Chinese stooge. In fact, to rescue his government from the wrath of the islanders, the Chinese Communist Party had last year dispatched its own police forces and security equipment to the Solomon Islands. That tells you just how intimately Sogavare and the CCP are in bed together.

Yet, Sogavare has a weak spot. His government is betting big on the Pacific Games of 2023. Much of the infrastructure for these games are being developed by China. However, Australia and New Zealand are also significant contributors when it comes to funding the island nation for it to successfully host the prestigious games.

Australia must realise that it has two options: it can either strongarm Sogavare into submission, or be ready to fund the Solomon Islands’ opposition.

Prime Minister Sogavare can be weakened if Australia makes it clear to him that Canberra will fund infrastructure development for the Pacific Games only if his government dumps China. If it does not, Australia and New Zealand must stop funding the Solomon Islands completely. All such funds must be diverted discreetly to the opposition forces in the islands so that they can kick Sogavare’s government out of power.

The Battle is Already Half Won

It must be remembered that the people of the Solomon Islands already hate China. They have even protested rather violently against the CCP’s involvement with their country’s government. Australia must capitalise on the anti-China sentiment prevalent on the islands to make it unfeasible for Sogavare’s government to keep supporting China and working at the CCP’s behest.

Mind you, there is also a chance that China will step in and replace Australia and New Zealand’s funding of the Pacific Games infrastructure should Canberra and Wellington pull out. It is therefore important for Australia to be ready to support the Solomon Islands’ opposition parties.

Read more: China and Australia’s forces are dangerously close to a heated clash in Solomon Islands

Australia has remained silent on the issue for far too long now. It is time for Canberra to act decisively. First, it must pressure Sogavare by dangling the proposition of his government losing out on Australian, American and New Zealander cash if he does not dump China. If that does not make him fall in line, together with New Zealand and the United States, Australia must make survival impossible for Sogavare’s government.

Now is the time to act. Once China builds a military base for itself in the Solomon Islands, it will be too late for Australia to take any action.