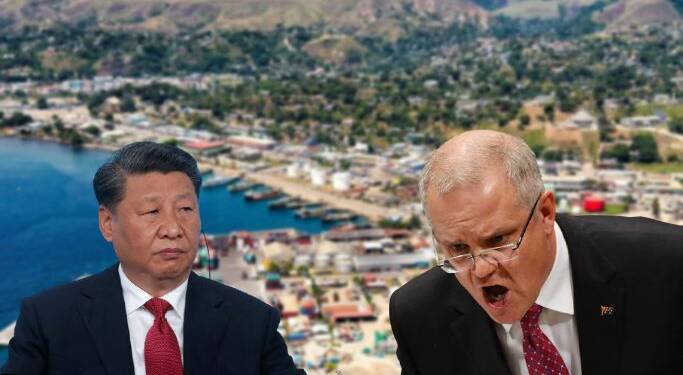 This switch has cost the Solomon Islands dearly. While the Chinese Communist Party has been able to enslave the country’s government, the people are free. And, they support Australia. Now here’s the thing with Australia. It has its police and security forces, numbering close to 200 personnel, deployed in the Solomon Islands.

The people of the Solomon Islands have been expressing themselves, without necessarily conforming to non-violent means and the politically correct side of things.

They have been setting fire to government buildings, rioting and protesting aggressively. They are in favour of better ties with Taiwan and Australia, and zero ties with China. Chinatown has been a prime target for the people of the Islands. The Solomon Islands has a population of 800,000 people. Mind you, Australia already has boots on the ground, and now, China is entering the picture, armed and ready to crackdown on pro-Taiwan protesters. And this only means one thing, and that is that the forces of Australia and China are dangerously close to violently clashing with each other.

China Rushes in its Forces

China has been quick to come to its proxy government’s rescue. On Thursday, the government of Solomon Islands announced that China will send Chinese police officers to the Solomon Islands to help train its police force.

The eye of the protests has been the most populous province of Malaita. Six Chinese police liaison officers will equip and train the Royal Solomon Islands Police Force.

With China sending in its police officers to the Solomon Islands, there is a high chance that Chinese and Australian personnel will cross paths and end up exchanging blows, which could then almost immediately unwind into a pan-Indo Pacific crisis.

Read more: the Solomon Islands is on the verge of a massive civil war over China and Taiwan

China has already tried to accuse Australia of the riots in November, when it claimed that Canberra was stoking anti-China and anti-regime protests across the Solomon Islands.

A Global Times editorial said, “It is clear that Australia’s overall attitude, and that of the US, is to connive with and even encourage the unrest, even though the Australian troops and police were sent to keep order in the Solomon Islands.”

The editorial insinuated that since Australia had deployed its police personnel in the Solomon Islands, “it is not hard to imagine how easy it will be for an external force to wreak havoc there.” China, therefore, already considers Australia responsible for instigating anti-government protests in the Islands.

So, when Chinese and Australian so-called ‘police forces’ come face to face in the country, one does not need to have a vivid imagination to predict what is going to transpire between the two sides.

Australia’s Ties with the Solomon Islands

Australia considers the Solomon Islands an essential part of its security outlook. Having a Chinese presence, or uncontrolled Chinese influence reigning in the Islands can be destructive for Canberra. This is precisely why Australia has always been quick to act when it comes to helping the Solomon Islands while being subtly supportive of the anti-government protests that are in place there.

Australia, for one, is not an entity that will back down from a fistfight with China. The Communist nation, meanwhile, has done a lot to trigger Australia, and the epic fight might just go down soon in the Solomon Islands!

China is training Tibetan children for military warfare. Not very far-sighted of Jinping