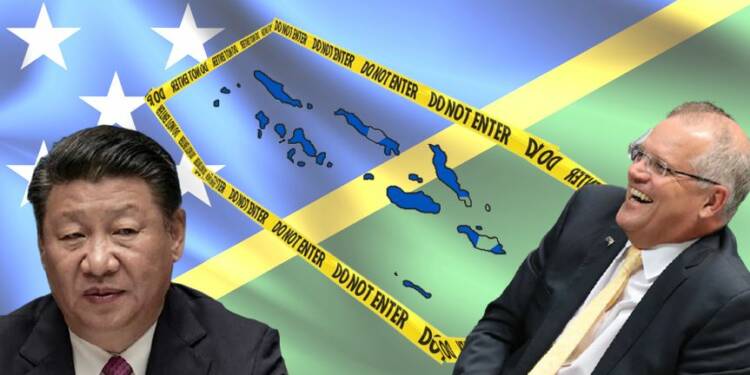 In the Indo-Pacific, there is fierce competition among the major powers, and commentators tend to overlook changes in smaller but crucial island nations while focusing on the bigger picture. The situation in the Solomon Islands has turned extremely violent. Media said that demonstrators from Malaita, the country’s most populous island, had travelled to the capital in a spillover of discontent over a variety of internal issues, including unfulfilled infrastructural pledges. They sought Prime Minister Manasseh Sogavare’s resignation.

The country’s central government’s ‘switch’ of diplomatic relations from Taiwan to the PRC (People’s Republic of China) in 2019 has had enormous destabilising consequences. Since then, PRC-linked businesses and workers have entered the Solomon Islands, distributing cash where it’s needed, buying influence, distorting local economies, and bringing in a more authoritarian attitude. A Honiara resident told AFP that protesters disobeyed a 36-hour lockdown imposed in the aftermath of Wednesday’s unrest, and came to the streets again on Thursday, attacking police and businesses in the capital’s Chinatown neighbourhood.

Also read: Solomon Islands is at the verge of a massive civil war over China and Taiwan

These developments tell us a harrowing tale of people who have been sidelined so that the Chinese overlords are kept happy. However, the way in which people are projecting their anger has made the Solomon Islands into a no-go zone for the Chinese Communist Party (CCP) and its designs. In addition to the instability, the government of the Solomon Islands has called upon Australia to help and solve the crisis, shrinking Beijing’s influence to become inconsequential.

The civil war at doors:

Those who have stood firm in their beliefs have been targeted for bullying, or worse. Malaita, the Solomon Islands’ most populous province, is the current flashpoint. The Malaita Premier, Daniel Suidani, is a widely respected and popular supporter of democratic principles, which has made him a threat to the CCP and its allies in the country. When Premier Suidani needed medical care outside the country, the central government refused aid. And when Taiwan stepped in to supply the needed care, the Chinese Embassy in the country was publicly furious, calling on the central government to punish him.

Also read: From Malaita to Palau, these Pacific islands are giving hell to China and calling for a China-free Pacific

The federal government’s attempt to demolish the provincial administration in general, and Premier Suidani in particular, is evident in Malaita. The announcement of a vote of no confidence is producing a lot of anxiety and concern in Malaita, as well as in Honiara, the country’s capital. It is apparent that the federal government is supporting this motion and is giving logistical support to its supporters. Malaitans are located all around the Solomon Islands, so you can’t truly remove them from the entire region – not like it’s a vacuum. It is actually fairly obvious that Premier Suidani and his government have the support of the vast majority of Malaitans.

The latest spell of protests:

The demonstrators from Malaita sought Prime Minister Manasseh Sogevare’s resignation. The protesting citizens’ complaints are thought to stem from a sense of neglect by the central government, as well as residual displeasure with the Solomon Islands’ decision to switch diplomatic allegiances from Taiwan to China in 2019.

Many villages on Malaita had developed strong ties with Taipei, and the island’s local government had often expressed displeasure with the island’s embracement of China. Inter-island tensions sparked instability, prompting an Australian-led peacekeeping force to be deployed from 2003 to 2017. Following general elections in 2006, violence erupted, with much of Honiara’s Chinatown being levelled over allegations that businessmen with ties to Beijing corrupted the vote.

Resurgence of unrest in the Solomons fuelled, in part, by lingering animosity towards Chinese businesses and the 2019 decision to switch diplomatic allegiances from Taiwan to China.

Australia comes to the rescue:

Australian Federal Police officers have been deployed to the Solomon Islands to “provide stability and security”, according to Australian Prime Minister Scott Morrison. Morrison said that he had received an official request for assistance and cooperation from the RSIPF (Royal Solomon Islands Police Force) under a bilateral security arrangement. According to him, Australia agreed to send 23 AFP members to assist with riot control, and up to 50 more to assist with security at vital infrastructure. A total of 43 soldiers of the Australian Defense Force will be deployed.

Witnesses shared photographs of smoke billowing from the city on social media, claiming that Chinese-owned businesses were being targeted, causing Beijing’s embassy in Honiara to express “serious concerns” to the Solomons’ administration. “[The embassy] submitted representations to the Solomon Islands, demanding that they take all necessary measures to strengthen the protection of Chinese firms and workers,” the statement stated.

Whatever Xi Jinping may try from Beijing, the presence of the Australian forces, as well as the increasing discontent for the attempt to colonise their small island nation, will make sure that the region remains a forbidden territory for the CCP.