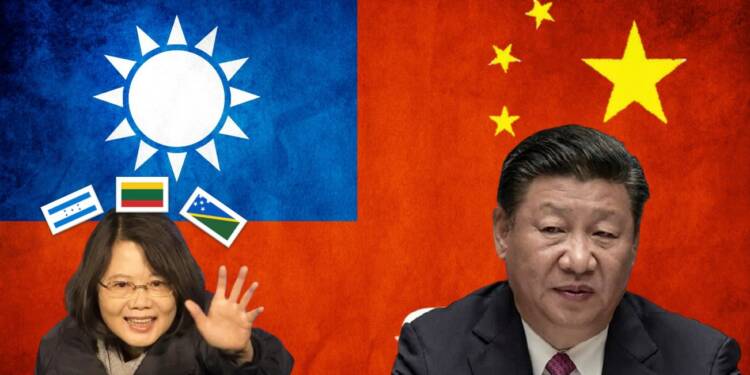 The re-election of Tsai Ing-wen in the 2020 Taiwanese presidential election came as a big jolt to the Chinese Communist Party which was hoping for a return of the Kuomintang (KMT) and a more subservient government. But, strengthened by the electoral backing domestically and coupled with its health diplomacy in the foreign policy realm, Taiwan has torpedoed itself in the international community as a responsible democratic power.

While Taiwan is successfully marketing a positive image with its actions, China under the grip of a paranoid Xi Jinping has followed a policy of a belligerent bully which can go to any extent for the sake of making other states subservient to its wills and wishes. Although it would have been workable earlier, the declining economy of China has made it incapacitated to fund its debt diplomacy & BRI investment projects, thereby losing the only leverage it held for a long time.

These developments have provided Taiwan with an opportunity to reverse all diplomatic losses it had to face in front of an extremely aggressive Beijing since the early days of Tsai Ing-wen’s presidency. If the earlier diplomatic losses for Beijing in Lithuania and Solomon Islands were not enough, the efforts of Xi Jinping to entice the Central American nation of Honduras into shifting its diplomatic ties away from Taiwan in favour of China are fast becoming a no-show.

The reversal of fortunes in Honduras:

Honduras is one of a small group of Central American and Caribbean countries that maintain diplomatic ties with Taiwan. In recent times China has tried to entice the country into shifting loyalties. Xiomara Castro, a leftist presidential candidate in Honduras who has sought to unite the opposition against a decade of conservative government, stated in her election manifesto that if she wins, she will “of course” seek to establish formal connections with Beijing.

Given the gravity of the situation, Brian Nichols, the US Assistant Secretary of State for the Western Hemisphere, made an unusually timed visit to Honduras early this week. This was enough for the Castro adviser who penned the manifesto to change tunes. The advisor said that no final decision has been made, easing the immediate concerns, and giving the US-Taiwan combine an opportunity to take care of the issue entirely.

Taiwan has also said that it will respect the result of the election but warned Honduras to be wary of China’s “flashy and false” promises. This has turned out to be the latest failure for Beijing’s attempt to internationally isolate Taiwan, the earlier ones being the Solomon Islands and Lithuania.

A people’s movement against China in the Solomon Islands:

The latest spell of protests in the Solomon Islands have turned extremely violent with buildings burnt in parts of the Chinatown district and more than 100 people arrested as of Saturday. The demonstrators, many of whom came from the most populous province of Malaita, sought Prime Minister Manasseh Sogevare’s resignation.

Solomon Island’s central government’s ‘switch’ of diplomatic relations from Taiwan to the PRC (People’s Republic of China) in 2019 has had enormous destabilising consequences. Now, these developments following the partisan politics supported by Beijing has turned the island nation into a no-go zone for China.

On the other hand, as reported by TFI, Lithuania had decided to have a “Taiwanese Representative Office” in its capital city – Vilnius. With this move, Lithuania had become the first country in Europe to use the word ‘Taiwan’ in representative offices or de facto embassies opened by Taipei in capitals across the world.

This too did not go down well with Beijing and as per the latest reports, China’s embassy in Lithuania has suspended consular services until further notice for “technical reasons”. Given the suspension came just after China downgraded its diplomatic ties with the Baltic State, leaves very little for the imagination.

The spree of diplomatic defeats that Taiwan and Tsai Ing-wen have dealt on Xi Jinping has left no room for the paranoid authoritarian to save face.