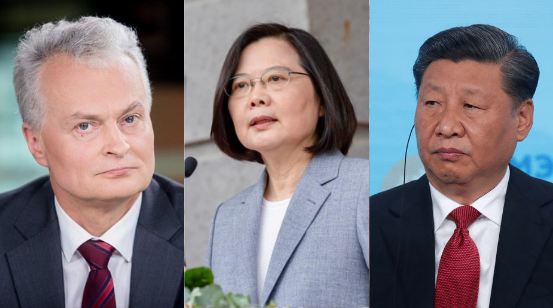 As the world community begins seeing the Chinese Communist Party for the devil that it is, support is growing for the free, democratic and sovereign island nation of Taiwan, also known as the Republic of China (ROC). In the latest addition of a country sending a clear and resounding message to the CCP-ruled Peoples Republic of China (PRC), Lithuania has decided to have a “Taiwanese Representative Office” in its capital city – Vilnius. With this move, Lithuania has become the first country in Europe to use the word ‘Taiwan’ in representative offices or de facto embassies opened by Taipei in capitals across the world. Interestingly, Taiwan’s representative offices are usually named as “Taipei Representative Offices”.

That the one coming up in Lithuania will be called “Taiwan Representative Office” is a very important development. Calling the move “significantly meaningful,” Taiwanese Foreign Minister Joseph Wu said, “Taiwan and Lithuania are both at the strategic forefront of defending democratic institutions,” adding, “I believe that through the close connection of shared values, the two countries’ peoples can work together to play a positive role in the international community and contribute to world peace, stability and prosperity.”

Thank you, @VCmilyte, for the message of friendship & support. #Taiwan🇹🇼 & #Lithuania🇱🇹 are like-minded partners bound by an unshakeable belief in the power of freedom & democracy to promote prosperity & build brighter futures for the people. https://t.co/uShkdDT1WK

China, meanwhile, is expectedly fuming. According to state media, China on Tuesday told Lithuania to adhere to the one-China principle and refrain from sending wrong signals to “independence” forces in the Taiwan region. China’s Taiwan Affairs Office said it opposed any country with which it maintains diplomatic ties having official relations with Taiwan. In a statement, it said, “We urge Lithuania to abide by the one-China principle and not to send the wrong signals to Taiwan independence forces.”

The United States welcomed Lithuania’s move to open a Taiwan Representative Office in its capital. In a statement, its de facto embassy in Taiwan said, “All countries should be free to pursue closer ties and greater cooperation with Taiwan, a leading democracy, a major economy, and a force for good in the world.”

The last time Taiwan opened a representative office in Europe was in the Slovak capital Bratislava in 2003. According to DW, that diplomatic mission is formally known as the “Taipei Representative Office”. In a significant move, the European country of the Czech Republic cancelled a sister city agreement with China in 2019, and instead went for one with Taiwan. The Czech Republic is pursuing enhanced diplomatic ties with Taiwan, at the expense of relations with China. Last year, the Czech senate leader Milos Vystrcil made a high-profile visit to Taiwan, infuriating the CCP.

China considers Taiwan an estranged province of itself, and has repeatedly said it will use brute force if necessary to ‘integrate’ Taiwan with the mainland. Taiwan, however, is a free and sovereign nation, and the Taiwanese want to have nothing to do with the Chinese. In the past one year, the issue of Taiwan’s independence and the need to protect it from a blood-baying China has grabbed global attention, as a consequence of which, if China were to now try and invade Taiwan, it would be met with a jaw-breaking response by the free world order.

Read more: A lion at home, and a cat abroad – Xi’s changed tune 15 days after his CCP meeting roar is hilarious

Earlier this month, Japan effectively abandoned the ‘One China’ policy as it showed Taiwan as a separate and free entity from China in its annual defense white paper. Japan has, meanwhile, committed to militarily protecting free Taiwan along with the United States if China were to launch an invasion against the democratic island nation.

Earlier, making his country’s stand on Taiwan abundantly clear, Japan’s deputy Prime Minister Taro Aso had said, “If a major incident happened (over Taiwan), it’s safe to say it would be related to a situation threatening the survival (of Japan). If that is the case, Japan and the U.S. must defend Taiwan together.”

With Lithuania opening a Taiwan Representative Office, the global campaign to strengthen Taiwan’s autonomy has gained further momentum. The democratic world order is now positioning itself against China, and the paper dragon will have no option but to succumb to the tremendous global pressure.