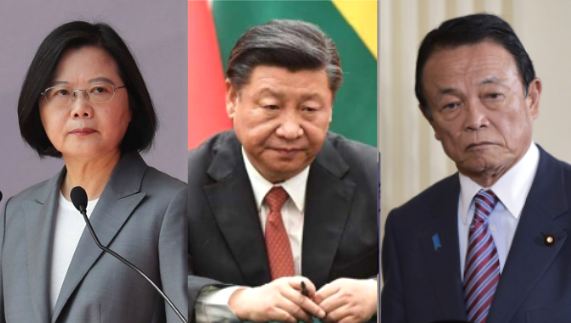 On July 1, the Chinese Communist Party celebrated 100 years of existence and subjugating, oppressing and punishing the people of China. Xi Jinping was as enthusiastic about the momentous occasion as a kid is for a birthday party. A very important aim of Xi Jinping is to ‘unify’ the free, democratic and sovereign country of Taiwan with the Chinese mainland, so that the CCP’s oppression extends across the Taiwan strait as well. The invasion of Taiwan using brute force is inevitable, and world powers are increasingly taking stock of the threat Beijing poses to democracy in the region.

Japan is one of the biggest China hawks that has emerged in the past one year. Chinese aggression in the East China Sea and in the Senkaku islands has convinced Tokyo that Beijing’s intentions are devious, and that it must take a lead role in securing the region. So, Japan’s deputy Prime Minister Taro Aso has signalled that Tokyo would consider a Chinese invasion of Taiwan an existential threat to its security, allowing Japan to help defend the self-ruled island along with the United States.

Japan’s deputy Prime Minister Taro Aso has spelt out his country’s policy in the event of a Chinese invasion over Taiwan. While delivering a speech in Tokyo on Monday, Japan’s second-in-command was quoted as saying, “If a major incident happened (over Taiwan), it’s safe to say it would be related to a situation threatening the survival (of Japan). If that is the case, Japan and the U.S. must defend Taiwan together.” Taro Aso, who serves concurrently as finance minister and also sits on the country’s National Security Council is known for his outspokenness. He added, “We need to think hard that Okinawa could be the next.”

According to the Japan Times, when asked about Japan’s stance on the cross-Taiwan Strait issue at a news conference on Tuesday, Aso said any contingency over Taiwan should be best resolved through dialogue, adding that Japan was closely monitoring the situation. However, that he laid down his country’s intention to repulse a Chinese invasion of Taiwan along with the United States is really a bombshell which will give sleepless nights to Xi Jinping.

Taro Aso is a former Prime Minister, and is cut from the same cloth as Shinzo Abe and Yoshihide Suga. He despises pacifism, and is working to ensure that Japan takes a proactive role in securing itself, and the Indo-Pacific at large from the Chinese. He is a significant stalwart in Japan’s politics, and for him to say that Japan and the US will confront China militarily if it invades Taiwan is as clear a declaration of support for Taiwanese independence as there can be.

Recently, the Financial Times reported that Japanese authorities, increasingly worried about China’s determination to invade and forcibly “reunify” Taiwan, asked American officials to share US plans for defending Taiwan. According to the Financial Times, “Japanese leaders apparently have resigned themselves to war in the event China invades Taiwan.”

China, meanwhile, cannot wrap its head around the fact that Japan is prepared to challenge a Chinese invasion of Taiwan. China’s foreign ministry spokesperson Zhao Lijian said at a regular news conference on Tuesday that Aso’s remarks “harmed the political foundation of China-Japan relations”, and China “resolutely opposed” them. He added, “No one should underestimate the Chinese people’s staunch resolve, firm will, and formidable ability to defend national sovereignty.”

Japan and Taiwan are establishing a very strong relationship, and with every move made by the two partners, China’s dreams of ‘reunifying’ Taiwan with the mainland takes a severe hit. For instance, Japan has taken a very significant decision to mention the importance of stability in the Taiwan Strait in its annual defence report for the first time.

Reported by TFI last month, it is almost like Japan and Taiwan have established a symbiotic relationship among themselves. Japan has also signed off on a US$338 million semiconductor research project to develop cutting-edge chip technology in the country with the market-leading Taiwan Semiconductor Manufacturing Company (TSMC). About 20 Japanese companies will work with TSMC on the project worth 37 billion yen. The joint public-private partnership will focus on tech for 3D chip assembly, allowing the creation of components that are more dense but still small.

Meanwhile, Chinese citizens have expressed concerns that the CCP has ruined the image of the nation and hindered personal relationships with the Japanese people. They have also expressed concern that Beijing’s intellectual property theft and human rights violations in Xinjiang may drive more Japanese companies out of the Chinese market.

According to a survey conducted between September and October of last year, 45.2 per cent of Chinese had a ‘favourable’ opinion of Japan. Since comparitive data became available in 2005, this was the second-highest proportion of Chinese people showering praises on Japan. The most common reason for the positive attitude towards Japan was because Japanese are ‘polite’ and they ‘put emphasis on manners’ with ‘high cultural standards’.

Japan is now all set to earn the respect of disgruntled Chinese citizens for standing in support of Taiwan in opposition to the CCP’s military advances on the island nation. Taiwan now stands a fighting chance, and in fact, if multiple world powers commit to protecting Taiwan, the CCP’s evil empire can soon be brought down to its knees.