Chinese shops get plundered in the Solomon Islands 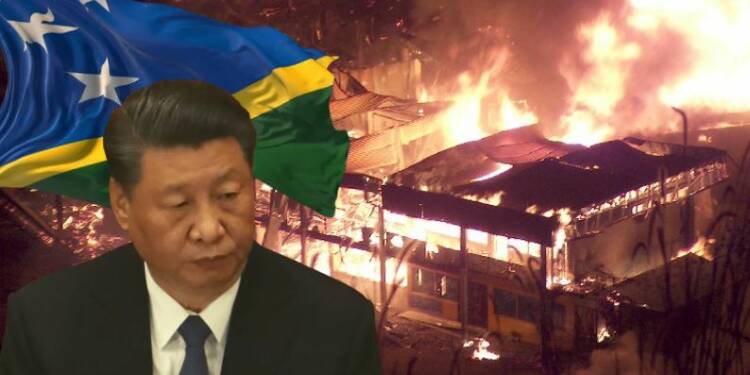 The Chinese Embassy in the Solomon Islands has a message for Chinese nationals in the country- stay alert or else you will be thrashed by the locals.

The warning came on Monday, roughly three months after the country witnessed some intense rioting and ransacking of Chinese businesses and shops. So, what exactly is happening in the Solomon Islands and why has the Chinese Embassy issued a sudden alert for Chinese nationals in the archipelago nation?

Last week, a store in  Honiara’s Chinatown area was seriously damaged and a Chinese employee suffered minor injuries. The renewed violence suggestes that islanders won’t let China stay in their country forever and will do one thing or the other to push them out.

The Royal Solomon Islands Police Force disclosed that the act of vandalism was carried out by 20-30 people. Four suspects were arrested and over US$3,200 were recovered.

Thereafter, on Monday, a seemingly disturbed Chinese embassy announced that it had “immediately activated the consular protection emergency mechanism” following the incident and had also asked local police to investigate the matter.

Meanwhile, it has asked Chinese citizens in the archipelago nation to be aware of security precautions and to take adequate steps for staying safe.

Why do the islanders hate China?

The Solomon Islands used to be one of the few nations across the world that maintained diplomatic ties with Taiwan. In 2019 however the country switched diplomatic relations from Taiwan to the PRC (People’s Republic of China).

The move was objectionable but the Solomons government sold it to the inhabitants of the country with the pretext of benefitting more from China than from Taiwan.

Soon, however, significant problems emerged. For starters, Daniel Suidani, the Premier of Malaita wasn’t on board with the central government’s decision to embrace China. Malaita is the second-largest and most populous province in the archipelago and therefore Suidani’s disapproval was significant.

Later, the people of the Solomon Islands would realise that their government’s China embrace was rather problematic.

Taiwan had warned the Solomon Islands of the Chinese ‘debt-trap’ in 2019 itself.

I don’t need to tell you what China was doing, do I? Beijing was literally trying to buy out the small archipelago nation with a huge loan. The Solomon Islands would have defaulted in all certainty and then China would have established a strategic base in the Pacific, creating a security threat for both Australia and the US.

As if this wasn’t enough, more murky revelations came out. Last year, Prime Minister Manasseh Sogavare faced accusations of using Chinese money in a national development fund to stay the votes of members of Parliament. And he denied the allegations, obviously.

So, China was suddenly facing allegations of debt-trapping, buying political influence and political interference. Solomon inhabitants were, of course, outraged. And Malaitans, in particular, got agitated.

In November, the Solomon Islands witnessed ethnic violence. The archipelago nation has a history of ethnic tensions between Malaitans and native Guadalcanal islanders, known as Guales. The capital city of Honiara too is located on the island of Guadalcanal.

Therefore, when Malaitan demonstrators got agitated by mounting Chinese influence in the country, they reportedly travelled to the capital in a spillover of discontent over a variety of internal issues.

And soon, they started directing much of their anger against China. In fact, some buildings were also burnt in parts of the Chinatown district during the intense ethnic violence that broke out last year.

The Solomon Islands even had to seek Australia’s help for handling the protests. Meanwhile, China made matters worse for itself by donating anti-riot gear like batons, helmets, shields and other “non-lethal” equipment for quelling the protests.

For anti-China elements in the Solomon Islands, it has become clear that Beijing is out to colonise them, loot their country and interfere with their internal affairs. China is trying to loot them, so they are looting Chinese shops and stores.

Anti-China activists in the Solomon Islands are therefore creating a hostile atmosphere for Beijing. They are making it clear to the Chinese nationals that a heavy cost will have to be paid for their malicious activities in the archipelago nation. This is a warning of sorts for the Chinese- leave the Solomon Islands for your own good.